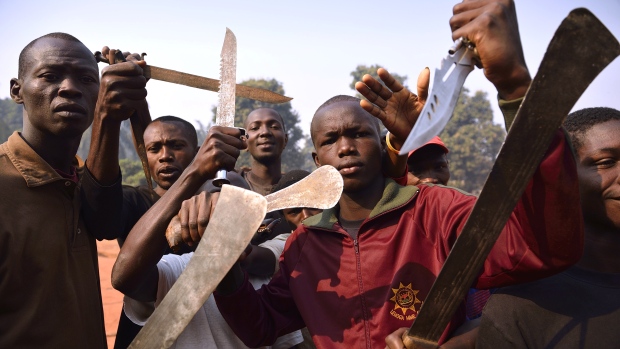 It has emerged that a Christian militia in the Central African Republic (CAR) has destroyed almost all mosques in the country.

The militia known as anti-balaka has been engaged in the persecution of Muslims after a Muslim leader deposed the country’s previous Christian President in 2013.

The United States ambassador to the United Nations- Samantha Power said 417 out of the 436 mosques in the CAR have been destroyed by the Christian militia. The few remaining mosques are said to be under siege by the militia and independent observers say that all Muslims have been completely wiped out of the country.

More than 5,000 people have been killed in the country since the violence began. The African Union has been unable to deal with the problem.

Nearly one million of the country’s 4.5 million residents have been displaced. Many of those who have fled are Muslim.

She visited the one remaining Muslim neighborhood in the capital, Bangui, and described the residents as “a terrified population”.  It is said that some of the pregnant Muslim women are so afraid of leaving the community while wearing their veils, that they are choosing to give birth in their homes instead of going to hospitals. The militia attacks anybody they see dressed in Muslim attire. The French and EU forces have tried very hard to disarm the militia, but these efforts have failed to yield any meaningful results.

There are about 750 EU and French troops left in the country and it is expected that these troops will soon be pulled out, leaving the country to its fate as the violence continues to spread.

The United Nations has said that it will deploy about 12,000 troops to take over from the departing troops; however these statements have yet to materialize since the Security Council made the proposal last year. The UN peacekeepers will assume their mandate in September this year, yet many observers say that it will be far too late to stop the violence.

The Central African Republic has been in turmoil since the Seleka rebels led by Micheal Djotodia ousted President Francois Bozize last year.

President Djotodia however resigned in January 2014 in a deal that was brokered by regional leaders; giving way for the first female president of the country, Catherine Samba-Panza, however violence continues to threaten the stability of the country. The United Nations estimates that more than one million people have fled their homes in the crisis and human rights activists have confirmed that the country has seen religious cleansing between Christians and Muslims.

Muslim civilians are being targeted by the militia in revenge for the seizure of power by the mainly Muslim rebels in 2013. The militia has said that they are taking revenge for atrocities committed by the Seleka Muslim rebels, when Mr. Djotodia seized power in March 2013.

The CAR is a landlocked country in Central Africa, covering an area of 620,000 square kilometers. It has never had a Muslim President since the country gained independence from France in 1960. The attempt by the Seleka Muslim rebels who ousted the Christian leader in 2013 has been attributed to the domination of the Christians in the political affairs of the country, virtually sidelining the Muslims.