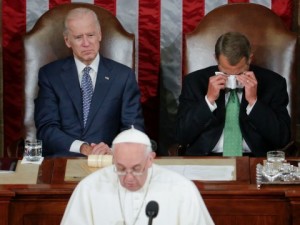 Washinton, DC – As of Friday September 26, 2015 The speaker of the House of Representatives has announced his resignation. This comes as without a doubt some of the biggest news happening in Washington this year. The man who is third in line to become president of the Unites States, and the leader of the Republican Party is abruptly leaving office in a non election year.

So why is he choosing to resign? Many people simply  know John Boehner as the controversial, conservative, and sometimes stubborn leader of the American Republican Party. But perhaps fewer know him as John Boehner, devout Roman Catholic. Pope Francis made global headlines during his first trip to the United States last week. On September 24th he stood in front of the American government and delivered a thoughtful message. Essentially stating that as people in positions of authority and power, their paramount duty is to care for the needs of the people; all the people. The ‘politics’ and squabbling of Washington, DC has only served to disconnect our leaders from the people they represent throughout the entire nation. What government must do as leaders is to care for the people of that country.

The presence of the Pope in Washington seems to have humbled John Boehner. The message of Pope Francis has struck a deep nerve, as less than 24 hours after hearing his speech, Boehner turned in his resignation. There will always be naysayers and there will be those people out there whom try to spin this one way or the other. Personally I hope this revelation has effected many more people serving within our government than just John Boehner. To Care for humanity; care for all the people; help one another. What should be obvious notions to us all, are sometimes lost in this hectic world.