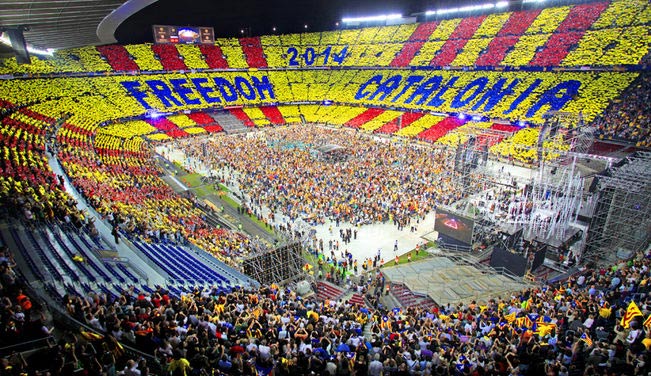 Don’tcha just love how the mainstream media seems to like to call people they love “rebels” or “pro-democracy supporters” while they vilify others by calling them separatists… or even terrorists (also secessionists)? We saw this in Ukraine, where the East Ukrainians simply wanted more autonomy… While the West Ukrainians ousted a Democratically-elected government and “elected” a new puppet without the East Ukrainians. Real democratic.

But I guess when your chosen puppet is bombing the f*** out of them, murdering civilians in the process while somehow getting away with blaming the evil Russians and the terror-sepperatists who are defending their land and NOT attacking anybody… Autonomists just doesn’t sound terrifying enough.

Anyway, guess who else is an evil separatist now? Catalonia.

Al Jazeera: A coalition of separatists is claiming victory after Sunday’s regional parliamentary election in the Catalonia region of Spain.

The Together for Yes group won 62 out of the 135 seats – and has formed an alliance with the smaller CUP party – which won 10 seats.

They say the result boosts their chances of achieving their dream; an independent Catalonia.

Pro-independence parties said before the vote that a “yes” result would allow them to unilaterally declare independence within 18 months. That the Catalans could have their own institutions such as a central bank, judicial system and army.

That’s right. Sorry Scotland, you had the chance to be the first. Men streaked in blue paint streaking through the streets screaming “freedom” could have been a thing.

Al Jazeera goes on to warn of “fallout” and “consequences” to get that all-important fear-mongering out there. I stopped watching the video after that.

By the way, The Guardian also called them “secessionists“, while Reuters called them separatists.

Should Catalonia actually choose to break away from the letter that made PIGS plural, you might want to know why. AP has written a surprisingly objective explanation:

Q: How and why did the vote come about?

A: Catalonia is a prosperous, industrialized region in northeast Spain sharing a Mediterranean border with France. It has for centuries treasured its own language and culture, but during the 1939-1975 military dictatorship of Gen. Francisco Franco, the Catalan language was banned in spoken and written forms.

The recent surge in independence sentiment stems from June 2010, when Spain’s highest court struck down key parts of a groundbreaking charter that would have granted Catalonia more autonomy and recognized it as a nation within Spain.

Artur Mas, Catalonia’s regional leader, began openly pushing for an independence referendum but Spain’s central government has repeatedly quashed moves for a plebiscite, maintaining it would be unconstitutional.

Eventually, Mas decided to turn elections for the regional parliament into a substitute ballot on independence.

A: Mas has claimed victory as separatists had a majority of lawmakers returned to parliament in Barcelona. However, opponents to independence say the majority of votes were cast by those did not want to break away from Spain.

Q: What does Spain’s government think?

A: The government of Prime Minister Mariano Rajoy has made it clear it will use all legal methods to prevent the independence of Catalonia, which accounts for nearly a fifth of Spain’s economic output.

A: With both sides claiming some form of victory, moves to declare independence will be opposed. Months of negotiations are likely.

Not bad AP, but you missed some stuff. Basically Catalans, like the Scottish, always had their own culture and their own language. Some dictator made life very miserable for them both awhile back.

For the Catalans, their language and culture had been brutally suppressed because they had supported the losing side of the Spanish Civil War between the Republicans, who were loyal to the democratic, left-leaning Second Spanish Republic, and the Nationalists, a falangist group led by dictator General Francisco Franco who seized power.

Clearly having your language and culture suppressed together with your previous autonomy and democratic leanings is something the Catalans have remembered.

They were both also the most prosperous part of their “host” nation, which means that they were supporting the rest of their debt-ridden nations.

In 2010, Catalonia was already slated to have been granted greater autonomy; even to the extent of being considered a nation within Spain. When this was changed, people were pissed.

Stay tuned for a list of better reasons for Catalan Independence. (Did you know that George Orwell was shot in the throat while he fought with them against the fascist dictator/general?)

This Article (Catalans Vote For Freeeeedoooom!) is free and open source. You have permission to republish this article under a Creative Commons license with attribution to the author(CoNN) and AnonHQ.com.