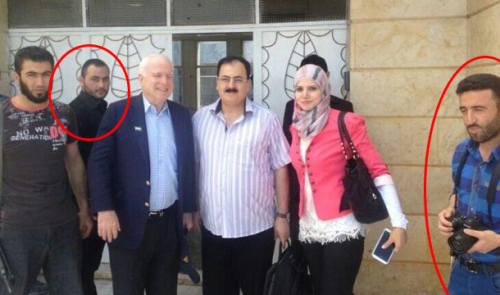 Lead war monger and Senator John McCain has confirmed Live On Fox News what many people had suspected, he met with ISIS in Syria and is in direct contact with them.  He even goes so far as to admit that he “knows these people intimately, I talk to them all the time.” unlike Senator Rand Paul. That should have people rethinking about the US involvement in fighting ISIS in Syria.

The ‘moderate’ opposition to ISIS in Syria just signed a non-aggression pact with them, meaning that they will now fight together to topple Assad. So unless America and our war hungry allies are planning on completely manufacturing new rebels from Syrian refugee camps in Turkey, we have no friends in the region.

However McCain, having met intimately with ISIS in his trip to Syria, thinks we should send them arms anyway. He says that reports about Rebels joining forces with ISIS to fight Assad are not true because he met them and is in contact with them on a regular basis. Why in the hell would John McCain be in contact with ISIS?

“providing material support or resources” to an organization the Secretary of State has designated as a “foreign terrorist organization.” The material support ban was first passed as part of the Antiterrorism and Effective Death Penalty Act of 1996 (AEDPA). The provision’s purpose is to deny terrorist groups the ingredients necessary for planning and carrying out attacks. Congress was concerned that terrorist organizations with charitable or humanitarian arms were raising funds within the United States that could then be used to further their terrorist activities. The provision outlawed any support to these groups, irrespective of whether that support was intended for humanitarian purposes.

By this measure, John McCain and other members of the government have violated the Patriot Act and should be punished to the fullest extent of the law.

This is a completely Orwellian state of mind to be in. Unless that is, if the truth of the matter is that this whole conflict in Syria is not truly about ISIS, and really about toppling the Assad regime. Then it would make sense.

The truth is that Senator McCain helped the US government create ISIS in the last two years in order to topple the government of Syria. America created ISIS and is now prepared to fight ISIS. This is perpetual war. This is Madness.

Then McCain had the nerve to ice the cake by comparing going to war in Iraq and Syria to Vietnam; but he’s actually right about that. Iraq has been this generation’s Vietnam, and it’s about to get a whole lot worse if these blood thirsty pundits and politicians have their way.

President Obama says there are no boots on the ground. What are the 2000+ soldiers and 10,000+ security contractors wearing then? Sandals? Tennis shoes?

The actions taken in Iraq since the renewed bombing began have already cost the US half a billion dollars. Operations are expected to last years and will likely lead to ‘mission creep’, as McCain predicts and embraces. This means we will likely get pulled fully back into Iraq and possibly Syria if Congress doesn’t rethink their march to war.

This article is free and open source. You have permission to republish this article under a Creative Commons license with attribution to the author and TheAntiMedia.org. Follow us on Facebook and Twitter to receive our latest articles.