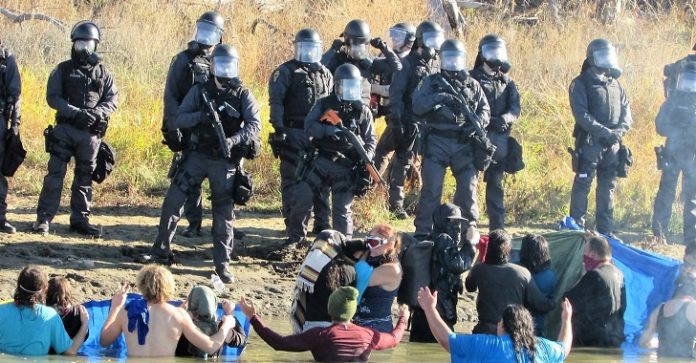 North Dakota — In the ongoing standoff between Native American water protectors and the Dakota Access Pipeline, the presence of militarized law enforcement has become an everyday occurrence. As such, it came as no surprise Wednesday when riot gear-clad police held the line at the edge of Cantapeta Creek as protesters attempted to reach a hillside that is sacred to the Standing Rock Sioux. However, journalist Erin Schrode was not expecting to be shot in the face with a rubber bullet as she interviewed a peaceful protester on camera. The land she was standing on appears to be Standing Rock Reservation territory and is located on the opposite side of the creek where protesters were demonstrating. Watch the video below:

@ErinSchrode Hi Erin. I am writing from Metro UK – please can we use your shocking video on our website with full credit to you? Thank you

“I was just shot. Militarized police fired at me from point blank range with a rubber bullet on the front lines of Standing Rock.

“My body will be okay, but I am hurting, I am incensed, I am weeping, I am scared. Peaceful, prayerful, unarmed, nonviolent people on one side of a river; militarized police with armed vehicles and assault weapons occupying treaty land on the other, where sacred burial grounds have already been destroyed. What is happening here in North Dakota is like nothing I have ever seen in my life, anywhere in the world. This is a fight to protect and defend the water for 17 million people in the watershed downstream to the Gulf, for a livable planet, for Native and human rights, for the lifeforce of us all. We are at the confluence of the movements for civil rights, for the environment, for peace, for justice. I am proud to stand in solidarity with our Native brothers and sisters – alongside the water protectors and land defenders – who put their lives on the line and are facing excessive force, pepper spray and mace, historic trauma, brutal arrest, imprisonment in dog kennels, felony charges, and callous destruction of sacred objects.”

This incident of law enforcement using violence against a journalist is not isolated; rather, it’s becoming a pattern at the site of the Dakota Access Pipeline. Dozens of journalists have been arrested, pepper sprayed, and now shot. Last week, our own Derrick Broze was tased by law enforcement while covering the protests for Anti-Media  — immediately after he told officers he was with the media.

This article (A Journalist Accidentally Filmed Herself Getting Shot by DAPL Police) is free and open source. You have permission to republish this article under a Creative Commons license with attribution to Nick Bernabe and theAntiMedia.org.