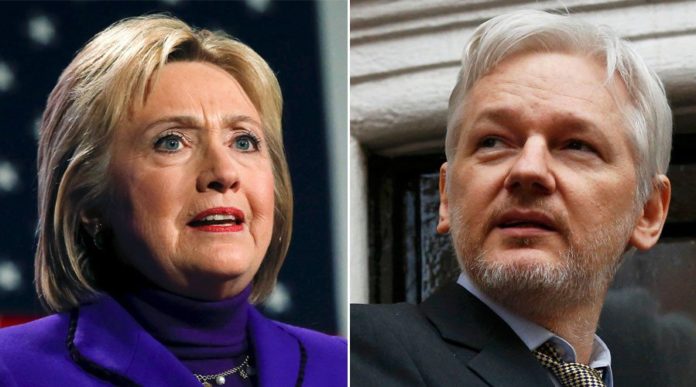 Wikileaks founder Julian Assange has said that Wikileaks have obtained information that, when released soon, will guarantee a Hillary Clinton indictment.

During a recent interview with ITV, Assange said his next release will:

WikiLeaks has already published 30,322 emails from Clinton’s private email server, spanning from June 30, 2010 to August 12, 2014. While Assange didn’t specify what exactly was in the emails, he did tell ITV that WikiLeaks had “accumulated a lot of material about Hillary Clinton, which could proceed to an indictment.”

Assange hinted that the emails slated for publication contain additional information about the Clinton Foundation. He also reminded ITV’s Robert Peston that previously released emails contained one damning piece of communication from Clinton, instructing a staffer to remove the classification settings from an official State Department communication and send it through a “nonsecure” channel. Assange then pointed out that the Obama administration has previously prosecuted numerous whistleblowers for violating the government’s procedures for handling classified documents.

In regard to the ongoing FBI investigation, however, Assange expressed a lack of confidence in the Obama administration’s Justice Department to indict the former Secretary of State.

“[Attorney General Loretta Lynch] is not going to indict Hillary Clinton. It’s not possible that could happen. But the FBI could push for new concessions from the Clinton government in exchange for its lack of indictment.”

WikiLeaks has long been a thorn in the side of the former Secretary of State, who called on President Obama to prosecute the whistleblowing site after its 2010 leak of State Department cables. Julian Assange remains confined to the Ecuadorian Embassy in downtown London, as Ecuador has promised to not hand over the WikiLeaks founder to US authorities.