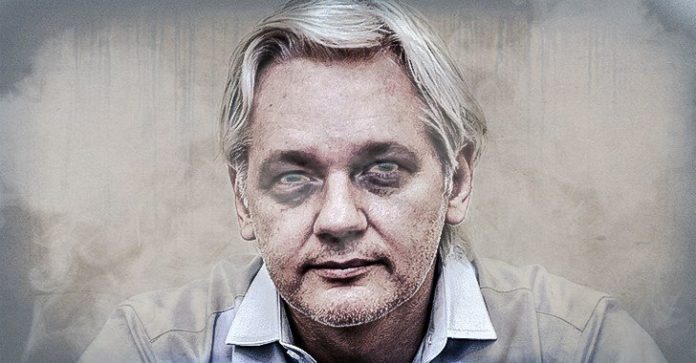 Embattled Wikileaks founder Julian Assange appeared in a London court this week to fight his impending extradition to the United States, as groups of supporters gathered outside to protest his incarceration.

Assange made his case before District Judge Vanessa Baraitser, arguing that his charges should be considered a “political offence,” a designation that would prevent his extradition.

In his testimony to the court, Assange said that he can’t think properly, and the conditions in prison have prevented him from organizing a case in his defense.

“I can’t research anything [in prison], I can’t access any of my writing, it’s very difficult where I am to do anything,” he said.

“This is not equitable what’s happening here,” he added.

His attorney, Mark Summers, QC, called the charges against Assange a “concerted and avowed drive to escalate its existing war on whistleblowers, to encompass investigative journalists. Our case is that it is a political attack to signal to journalists the consequences of publishing [classified] information.”

Summers also noted that evidence has come forward that Spanish security firm Undercover Global was spying on Assange for the United States.

“The American state has been actively engaged in intruding on privileged discussions between Assange and his lawyers,” Summers said, pointing to evidence that Assange has had all of his communications monitored over the past several years. He even mentioned, “hooded men breaking into lawyers’ offices.”

There have also been concerns that his health is deteriorating while in custody. During the hearing this week, Assange appeared thin, pale, and in generally bad condition. He reportedly even had trouble recalling his birthday when he was asked by the court.

Barrister Greg Barns, who acts as one of Assange’s Australian advisers, told ABC Radio that it is currently impossible for Assange to put together a legal defense for himself under these conditions.

“I think it’s been a very difficult time for him. There’s no doubt that his health has been adversely impacted by seven years living effectively without natural sunlight and cooped up in the embassy and now at Belmarsh Prison. Prisons are no place for people who are unwell and generally a person’s health deteriorates in the prison environment, particularly Belmarsh Prison, which is a harsh prison,” Barns said.

“It does make it difficult in terms of preparation of his case. He’s got to be able to instruct his lawyers, this is a complicated case, and he’s going to be able to do that in circumstances where his health improves,” he added.

Earlier this year, Assange was indicted on 17 new charges under the Espionage Act in the United States, which together carry a potential prison sentence of 175 years. However, over a decade of his life has already been taken away as a result of the U.S. government’s crusade against him.

In this week’s hearing, his request for more time to prepare for his case was ultimately denied by the judge. He is scheduled to appear in court again in February of 2020.

Wikileaks founder Julian Assange wanted more time to fight a legal move to extradite him to the US, but a magistrate in the UK has knocked that back.