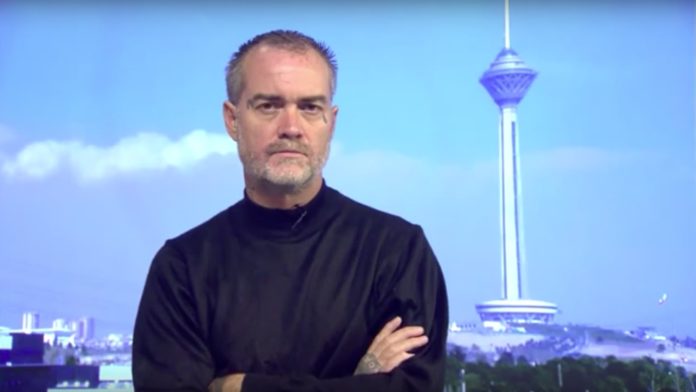 The former marine is on another angry truth-telling mission, and it’s well worth checking out.

Ken O’Keefe served with the US marines before re-styling himself as a thorn in the side of the military-industrial complex. He went on to blow the whistle on the sinister truth behind the War On Terror, and he’s more pissed than ever about the Paris attacks and what he considers to be the enormity of the media lies surrounding it.

When asked during a Press TV interview whether the Paris attacks were a warning sign to the countries supporting the terrorists in Syria , O’Keefe responded in his usual no-nonsense style:

“I hope it’s a wake-up call for us to realize that we are Isis. That the western governments are in bed with Saudi Arabia, who is the primary funder of ISIS, along with Qatar and other Gulf States. We not only provide political cover and military assistance to Saudi Arabia while it slaughters innocent people in Yemen, but we also give provide the cover for them to go ahead and do their dirty dealing with these psychopaths who are running around Syria and Iraq.”

“Let’s remember that before the United States invaded Iraq there was no Al Quaeda in Iraq: look at it today. Let us also remember that when Gaddafi was in power in Libya, there were very few Al Quaeda there; now it’s an absolute basket case full of these operatives.”

O’Keefe goes on to point out that far from being an enemy of the West, Syrian President Bashar Al Assad was complicit in USA anti-terror operations and was even assisting the Pentagon in its torture of ‘enemies’. Those enemies have since changed, of course, and now Assad himself is wanted by the USA. Wake up, O’Keefe says.

“I believe it is beyond any doubt for any sensible person to realize that not only is the USA providing the financial, military and political cover for these terrorists, but we’ve also provided the training for these psychopaths in Jordan and Turkey. The idea that the west is fighting a war against ISIS is beyond ridiculous. People need to start realizing we are ISIS, and the reason our corrupt, treasonous governments are carrying out these policies is because they don’t represent us;  they represent the bankers, who can make a lot of money from war- and more importantly, as long as we’re all fighting each other, then they can maintain this tyrannical system of never ending war.”

O’Keefe makes the controversial claim that ISIS is controlled by Israeli intelligence agencies and says it is “disgusting that people have been conned into thinking Muslims have anything to do with this. I’m non-Muslim, and I’m angry about how 1.8 billion people have been associated with this monstrosity,” he says, mentioning (like others) the overwhelming hospitality and generosity he has experienced in Arabic countries.

“9/11 is one of the greatest fairy stories ever told,” O’Keefe says, detailing evidence that blows the official story out of the water. No, he says, Muslims were not responsible, and they still aren’t. The West created ISIS:  “They never attack Israel, and that in itself tells you a lot about who these people really are.”

The agenda, O’Keefe says, is to create a clash of civilizations, destabilize the Middle East, and to “sow the seeds for sectarian hatred.” The chaos we now see is no accident, O’Keefe says: it’s an intentional policy that was planned a long time ago. O’Keefe also says mainstream media journalists who regurgitate Islamophobic lies have “sold their soul to the devil” and “should be arrested for war crimes and crimes against humanity.”

Finally, he points out, quite rightly, that Iran is actually one of the most peaceful countries in the world. It has been legitimately fighting terrorism for years now, it offers sanctuary to Jews and Christians alike, and it hasn’t been involved in any wars for over 200 years, other than the “imposed” [Iran-Iraq) war of the 1980s, which the USA (“and its attack dog Saddam Hussein”) was responsible for in the first place. Speaking from the Iranian capital Tehran, O’Keefe says: “Here the threat from ISIS is next to none, because unlike Britain, the USA, France, Saudi Arabia and other Gulf States, Iran isn’t a player in this game.”

This version of O’Keefe’s interview has French subtitles in case any of you have friends in France you’d like to share this with.

This article (Ken O’Keefe In Another Epic Rant On Paris, ISIS, And Media Lies) is free and open source. You have permission to republish this article under a Creative Commons license with attribution to the author and TrueActivist.com