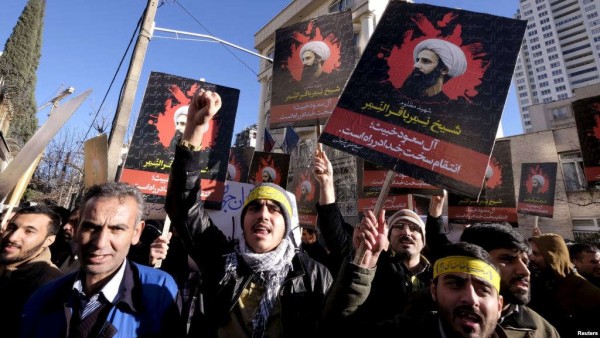 Following the killing of 47 people including a prominent Shia cleric Sheikh, Nimr Bakir al-Nimr on Friday January 1st, 2016 by the Kingdom of Saudi Arabia, Shia Muslims in the Islamic World took to the streets to protest against Saudi Arabia.

In the Shia dominated country of Iran, protesters attacked the Saudi embassy in the capital, Tehran on early Sunday. Protesters also attacked a consulate in the northeastern city of Mashhad. Iranian officials have said they have arrested some 44 people in connection with the Saudi embassy attack. The Iranians called the attack on the embassy unjustified.

In Bahrain where the Shias are also the majority, protests broke out. Police had to use tear gas and rubber bullets to get the situation under control. Even in Saudi Arabia, clashes were reported in Shia-dominated areas. Shia activists have called for massive protest across the Islamic World against Saudi Arabia. But in a latest development, Saudi Arabia, Bahrain and other Sunni governments in the Islamic World have all announced that they are ending diplomatic ties with Iran. All countries claim Iran is behind the current protests taking place in their countries.

Saudi Arabia was first to make the announcement on late Sunday. Bahrain and the Republic of Sudan followed it up on Monday. The United Arab Emirates also announced on Monday that it is reducing its embassy staff in Iran.

In a news conference, Saudi’s Foreign Minister Adel al-Jubeir said all Iranian diplomats must leave the kingdom within 48 hours. Jubeir accused Iran of trying to destabilize the region by creating terrorist cells in Saudi Arabia.

He also said the attack on the embassy was in line with Iran’s alleged earlier attacks on diplomatic buildings, and that Saudi Arabia would not allow the Islamic Republic of Iran to undermine the Sunni kingdom’s security. “The kingdom, in light of these realities, announces the cutting of diplomatic relations with Iran and requests the departure of delegates of diplomatic missions of the embassy and consulate and offices related to it within 48 hours. The ambassador has been summoned to notify them”, he said.

Bahrain is ruled by a Sunni Muslim king, but has a majority Shia population. The ruling dynasties of both Saudi Arabia and Bahrain are Sunnis. And the two dynasties have strong alliance.

The country accused Iran of increasing, flagrant and dangerous meddling in the internal affairs of Gulf and Arab states.

Bahrain said in a statement that the attack on the Saudi embassy was part of a “very dangerous pattern of sectarian policies that should be confronted… to preserve security and stability in the entire region”.

Another Sunni dominated government in North Africa; the Republic of Sudan has also announced severing diplomatic relations with Iran, in solidarity with Saudi Arabia over its attack on diplomatic buildings in Iran.

A Sudan foreign ministry statement read: “In response to the barbaric attacks on the Saudi Arabian embassy in Tehran and its consulate in Mashhad… Sudan announces the immediate severing of ties with the Islamic Republic of Iran.”

The UAE has also said it was downgrading its diplomatic representation in Iran, and it will cut the number of Iranian diplomats in the country.

The Sunnis and the Shias are rival factions in Islam. It is the dominant factions in the religion. The two factions disagree on some tenets of the religion. Historians say the historic background of the Sunni–Shia tension lies in the break that occurred when the Islamic prophet, Muhammad died in the year 632. The Prophet’s death led to a dispute over who should succeed him as the new leader (caliph) of the Islamic community. Those who favored Abu Bakr are the Sunnis while those who backed Ali Ibn Abi Talib are Shias.

This historical conflict has continued till today, and observers say it has developed into the current geopolitical consequences we are witnessing.

Human rights group have accused Saudi Arabia of using terrorism as a pretext  to execute people it deemed threat to its political power. It executed 151 people in 2015 alone. And many of those killed are Shia Muslims. Human rights activists say it is the highest recorded figure in the country since 1995. In 2014, the total number of executions carried out was reported to be around 90. The executions were mostly done with the sword.

The United States, which is allied with Saudi Arabia has urged diplomatic engagement and called for leaders in the region to reduce tensions, but has failed to comment on the killing spree by Saudi Arabia. We can report authoritatively that the situation on the ground is very volatile in the Islamic World due to the actions of Saudi Arabia. Tension is still mounting.

The following events have occurred since Saudi Arabia announced that it has executed the Shia cleric, Sheik Nimr, along with 46 others for terrorism charges:

Two bomb blasts have rocked two Sunni mosques in and around Hilla, a city 80km south of the Iraqi capital, Baghdad. One person is said to have died.

Unidentified gunmen have also shot and killed a Sunni imam of a mosque in Alexandria, north of Babylon in Iraq.

On Sunday night, in the hometown of Sheik Nimr, Awamiya in eastern Saudi Arabia, police came under heavy gunfire. Local media said one civilian died while a child got injured in the attack.

We are still following development on the ground closely. We will continue to give you an independent and unbiased report of this unfolding story in the Islamic World. Expect Us!

This Article (Killing Of Shia Cleric: Saudi Arabia, Bahrain And Other Sunni Governments Sever Diplomatic Ties With Iran) is free and open source. You have permission to republish this article under a Creative Commons license with attribution to the author and AnonHQ.com