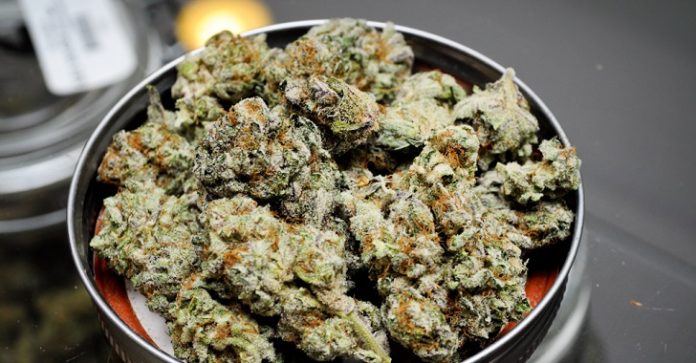 The $1 trillion War on Drugs launched by President Nixon in 1971 created the Mexican drug cartels, now legalizing weed is killing them.

The Mexican drug cartels are finally meeting their match as a wave of cannabis legalization efforts drastically reshapes the drug trafficking landscape in the United States. It turns out that as states legalize cannabis use and cultivation, the volume of weed brought across the border by Mexican drug cartels dramatically decreases — and is putting a dent in their cash flow.

A newly-released statistical report from the U.S. Border Patrol shows a sharp drop-off in cannabis captured at the border between the United States and Mexico. The reduction in weed trafficking coincides with dozens of states embracing cannabis use for both medical and recreational purposes.

In fact, as the Washington Post reports, cannabis confiscations at the southern border have stumbled to the lowest point in over a decade — to only 1.5 million pounds. That’s down from a peak of four million pounds in 2009.

Speaking to Anti-Media, Amir Zendehnam, host of the popular cannabis show, “In the Clear with Amir” on Z420.tv, told us what he thinks of these new statistics:

“The economics of the cannabis industry show us that with healthy competition in the market, prices drop, quality rises, violence diminishes, and peaceful transactions increase. As constant new research emerges detailing the plant’s benefits, the negative stigma of using cannabis, both medicinally and recreationally, is diminishing, raising the demand for high quality product.

“Colorado, for example, is experiencing an economic boom that has never been seen in the state. The biggest issue in Colorado today is what to do with the huge amounts of revenue and economic success the state is gaining as a result of legalization. The Colorado model has proven that legalization reduces crime rates, cuts prices, pushes unfavorable competition out of the market, provides cleaner products with heightened transparency, and increases the standard of living for society as a whole.

“The only people hurt by continued societal acceptance and legalization of cannabis are the cartels and their friends, who have flourished for decades as a result of drug prohibition.

“As legalization spreads across the U.S. and the rest of the world like wildfire, I predict the industry will soon become one of the most dominant and beneficial industries humanity has ever seen.”

And the new competition from legal states has taken a big bite out of the entire illicit Mexican marijuana food chain. “Two or three years ago, a kilogram [2.2 pounds] of marijuana was worth $60 to $90,” a cannabis farmer in Mexico said in an interview with NPR. “But now they’re paying us $30 to $40 a kilo. It’s a big difference. If the U.S. continues to legalize pot, they’ll run us into the ground.”

Consumers are also starting to see the difference. Cheap low quality Mexican cannabis has become almost impossible to find in states that have legalized, while prices for high quality home-grown have steadily decreased.

This is good news for Mexico. A decreasing flow of cannabis trafficking throughout the country will likely lead to less cartel violence as revenues used to buy weapons dry up. Drug war-related violence in Mexico was responsible for an estimated 27,000 deaths in 2011 alone — outpacing the entire civilian death toll of the United States’ 15-year war in Afghanistan.

These developments reinforce criticism of the War on Drugs as a failed policy. Making substances like cannabis illegal simply drove the industry underground, helping make America the largest incarcerator in the world.

Legalizing cannabis will also save the United States a great deal of money. As Mint Press News reported:

“Since Richard Nixon declared a war on drugs in June 1971, the cost of that “war” had soared to over $1 trillion by 2010. Over $51 billion is spent annually to fight the drug war in the United States, according to Drug Policy Alliance, a nonprofit dedicated to promoting more humane drug policies.”

Early reports from Colorado’s cannabis tax scheme show that revenues that will ostensibly help schools and rehabilitation efforts by flooding the state with cash. In fact, Colorado became the first state to generate more tax revenue from cannabis than alcohol in one year — $70 million.

But why stop with cannabis legalization? As more and more drug propaganda is debunked thanks to the legal weed movement, it’s time to also advocate for drug legalization across the board. The drug war’s criminalization of substances has done nothing to stem their use, and has simply turned addicts into criminals, even though plenty of experts agree that addiction is a health issue, not a criminal one.

Maybe it’s time for the U.S., Mexico, and other countries to embrace the Portuguese and Irish model of treating addiction to drugs like an addiction to alcohol or cigarettes, using rehabilitation — rather than incarceration — to confront the problem.

READ NEXT: 8 Reasons Why Ending The War On Drugs Would Make The World A Safer Place

This article (Legalizing Weed Has Done What 1 Trillion Dollars and a 40 Year War Couldn’t) is free and open source. You have permission to republish this article under a Creative Commons license with attribution to Nick Bernabeand theAntiMedia.org. Anti-Media Radio airs weeknights at 11pm Eastern/8pm Pacific. If you spot a typo, email [email protected].