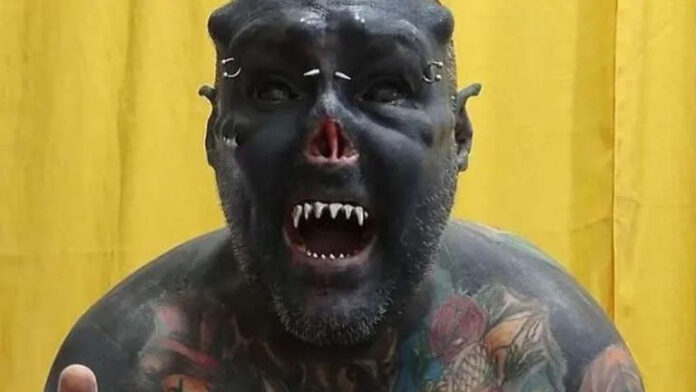 Tattoo artist Fernando Franco de Oliveira’s role models are the “Lord of the Rings” Orcs. He wants to be one of the movie villains and has now had himself transformed into one.

Sao Paulo/Brazil – When fan love degenerates. It has become commonplace for fans to get tattoos of their favorite stars or to have themselves transformed so that they bear some resemblance to their idol. But French-born Fernando Franco de Oliveira showed how far his love for the “Lord of the Rings” characters can go. His role model is the orc villains. So for years, the trained tattoo artist had his entire body engraved with dark motifs. To crown his transformation, he then cut off his nose. Please what?

Quick fact: Orcs are creatures from the “Lord of the Rings” movies. They are villains with sharp teeth, pointed ears, scarred faces and – no nose. A role model for the French-born artist – because that’s how he wants to look. Fernando Franco de Oliveira now has all that behind him. Even his eyeballs are tattooed – like almost the rest of his body. Only his palms and soles are not yet covered with tattoos. The tattoo artist, who has lived in Brazil for several years, had implants placed on his head. He also got a forked tongue and vampire teeth in recent months.

Fernando Franco de Oliveira owns his own tattoo studio in Sao Paulo – he is “addicted” to the pain, as he admitted himself on his Instagram account. He is regularly invited to TV shows, people want to take pictures with him when they see and recognize him on the street. Despite having his nose cut off, however, he can still breathe “normally.” In an interview with the Daily Mail, he explained, “I have a split tongue, an orc ear, vampire teeth and horn implants in my head. The last thing I did to make myself look completely scary was my nose. I mutilated it to look like a skull!”. But he’s not done with his transformation yet – Fernando Franco de Oliveira wants to have more horn implants in his head to look even more like his role model, the “Lord of the Rings” orc.

“Lord of the Rings” fan shares before-and-after pic: Instagram users show shock
Fernando Franco de Oliveira didn’t look like this until a few years ago, presenting himself on his social media platforms as a young man with a few tattoos. Last year, the tattoo artist made a before-and-after comparison with an older and a new picture of himself. His followers were shocked and commented on the public post, “What have you done with your life?” one user wondered. “You have changed a little. Yet you were so beautiful,” wrote another follower. But the “Lord of the Rings” fan was not influenced by the negative comments and continued to transform into an orc.