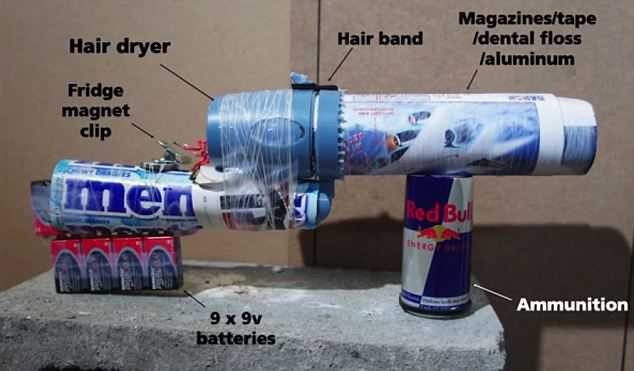 Though he probably wouldn’t be able to get his homemade shotgun through security at the airport, Evan Greer was able to build one, with all materials he found after he had made his way through the security screening.

Booth, a programer and security researcher, pieced together the explosive device in his home workshop, making sure not to violate any laws in the process, but used items like an Axe deodorant can, dental floss, lithium ion batteries and water.

“People who understand security understand that the current screening procedures exist primarily to put passengers at ease — ‘security theater,’ if you will.  They also know that, given enough time, a persistent attacker will succeed to some degree,” he said.  “I think people have kind of been suspecting that the type of things I’ve built are possible.”

He, essentially, built a blunderbuss capable of blasting pocket change through sheet rock. When combining the lithium metal with water, it creates enough heat to explode the bottle of Axe, sending the pocket change flying.

It’s important to note that Booth has contacted the TSA and the FBI and the FBI made an unannounced visit to his house.  According to Booth, their questions were centered around whether he had made the weapon at the airport, which he had not.

Here’s the weapon in action