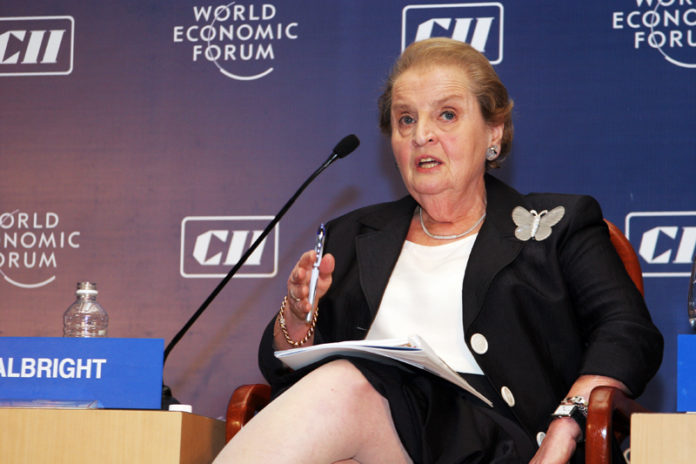 She is a colorful woman with an impervious history. It seems nothing bothers the former Secretary of State, though it is rumored she regrets her statement regarding the results of sanctions in Iraq, that half a million children had been killed. “I think it’s a very hard choice, but we think it was worth it.”

Her name is Madeleine Albright, and her political career on the international and domestic fronts are impressive. Impressive, but one remains wary of her callous, unsympathetic nature; her track record for the expansion of NATO and the bombings of the Bosnian and Croatian Serbs cannot not be dismissed. Nor can the advancement of NATO members to Russian borders or her condemnation of Siberia belonging to Russia, or her role in the formation of policy during the Kosovo War.

Madeleine Albright became part of the American elite at a young age and found her niche in politics. Her father’s hatred toward Communism, Marxism and Russia remained with her. In the years of Jimmy Carter, she entered the National Security Council, and later moved on to representation with the UN as a permanent member, and later to the Council on Foreign Relations.

The co-investor with Jacob Rothschild and George Soros, is the woman who has been nicknamed ‘Hawk’ for her political endeavors. She has undoubtedly become a prominent feature in our twentieth century politics.