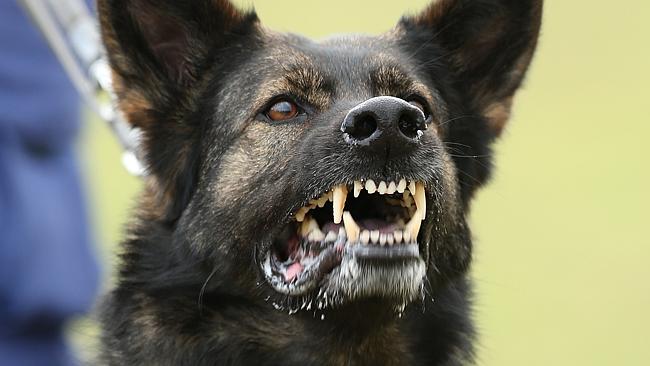 It seems my faith in the American police force to destroy my faith in humanity has once again been restored:

This video, taken from police body cam, was released as part of a lawsuit filed against the West Jordan Police Department by Lee Hoogveldt, who was viciously attacked by the dog. You see, just filming the police is practically worthless if you don’t ARREST them for their crimes….

The officers are seen entering the house and ordering Hoogveldt to raise his hands. He complies, but the cops sic the dog on him anyway, because compliance is defiance in Orwellian American. It goes straight for his face….

In graphic footage, the dog chews on Hoogveldt’s face for several seconds as he groans in agony. The animal bites him in the mouth, causing Hoogveldt to bleed profusely.

Quite clearly in shock, Hoogveldt is then wrestled to the ground and yelled at by cops to cooperate. All the while, the dog, named “Pyro” (yeah, I wonder why they picked THAT name for it, the sickos), is allowed to continue biting Hoogveldt in the legs and backside.

An officer then goes on to “drop” a chair on to Hoogveldt’s head. Oops.  The cops then document his injuries by taking photos, before hauling him away.

Police had been called to Hoogveldt’s house because a neighbour reported that there was a fire in his back yard. Right, call a “pyro-maniac” to deal with a fire…

“To protect the neighbourhood, they had to go in and secure Mr. Hoogveldt,” West Jordan Sgt. Dan Roberts told reporters. “The fire department could not respond to take care of the fires.” However, in the video the cops are heard saying that the fire was nothing, just some stuff burning in a barrel. I guess “saving” this man’s life, AFTER they realized that there was NO DANGER to ANYBODY, means SICCING A KILLING MACHINE ON THIS MAN’S FACE… BECAUSE… BECAUSE REASONS!

Police say that the use of force was justified because Hoogveldt has a “criminal record involving weapons”…. First off, I reckon they thought of that reason AFTER realizing they’d mutilated the innocent man. Second, using that logic, you could shoot a chef in the face “because he was proven to have used sharp pointy objects”.

Sgt. Roberts said that releasing the dog was justified as Hoogveldt “could have easily been hiding a weapon on him.” Yeah, and he could have been a fairy-ninja-queen.

In the footage, one officer is heard saying that he “had to look away” when the dog had Hoogveldt by the face. “When he had him on the mouth, I was like ‘oh my ******’” the cop says to his colleague.

Describing the incident, Hoogveldt said “I didn’t dare to move. I put my hands up and froze. If I would have blinked, I thought I was going to get shot.”

A civil rights case will now be heard in Federal Court.

“There’s a right to be free from unlawful entry, under the Fourth Amendment,” Hoogveldt’s attorney Robert Sykes said. “We have a police officer without a warrant, kicking down a door, and going in someone’s home.”

“At the time and place this force was used, there was no justification at all to sic a police dog on somebody.” the attorney added.