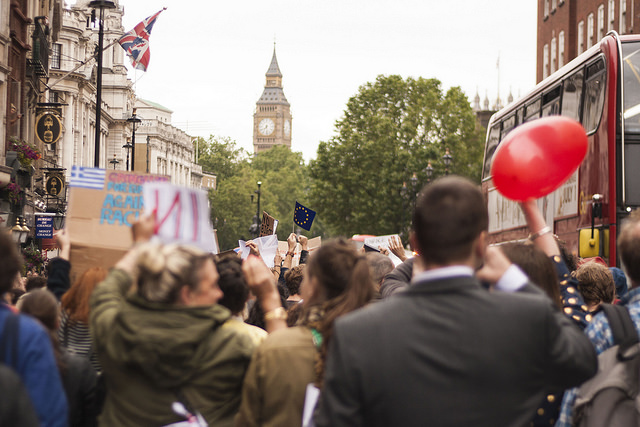 In the wake of Britain’s decision to leave the European Union in last months referendum, thousands of protesters took to the streets of London over the weekend to voice their disappointment with last months vote.

Holding placards saying “Bremain” and “We Love EU,” the demonstrators gathered around Park Lane before setting off for Parliament Square on Saturday. The “March for Europe” rally, which was organized on social media, drew more than 50,000 people into the capital, according to estimates.

“We call for an end to political indecision about Britain’s future. We want our elected representatives to outline what our future is in Europe, to be transparent about how our country can thrive in troubling times,” a statement on the Facebook event page read.

People from all walks of life – families, the young, the old and the middle-aged – traveled from across the country to take part in the demonstration and demand that the UK’ relationship with the EU be reconsidered. A rally also took place in York.

And still they march. A #MarchforEurope in these impressive numbers would have been unthinkable just 10 days ago. pic.twitter.com/sGYn6ZLAb0

“The referendum was a massive mistake for our country and is a step in the wrong direction. We started this initiative to demand this situation be reconsidered and the UK’s relationship with the EU maintained. A good solution can and must be found,” said organizer Keiran MacDermott.

On June 23, Britain voted to leave the EU in the referendum, with 51.9% in favour of leaving and 48.1% supporting Remain. It has been estimated that it will take up to two years for the UK to fully detach itself from the European Union, prompting many to stop the process before it even begins.

According to organizer Keiran MacDermott, it is hoped that this protest will stop the British government from triggering Article 50, which will finally begin the UK’s official withdrawal process from the EU.

Upon reaching Parliament Square, demonstrators then took to the stage to share stories and poetry, Many even voiced their disappointment with the “lies” of the “Leave” campaign, taking to the stage to give speeches about the benefits of remaining in the European Union.

Sir Bob Geldof was among those who took to the stage to condemn the lies that were told as part of the leave campaign, urging Remain voters to talk to those who wanted to leave the EU and explain their views.

“We need to individually organise ourselves. Organise those around us and do everything possible within our individual power to stop this country being totally destroyed,” he said. “Don’t get angry, explain.”

Labour MP for Tottenham David Lammy, Liberal Democrat leader Tim Farron, leftwing commentator and activist Owen Jones also took to the stage at Parliament Square to speak out against the recent vote. In addition, a video message from Pulp singer Jarvis Cocker was also shown at the rally. In the short video, Cocker was seen holding a world map and saying : “You cannot deny geography. The UK is in Europe.”

On the Sunday, the day after 50,000 demonstrators marched to Parliament Square, Britain’s youth also took to the streets of London to call for the voting age to be lowered to 16. In the UK, citizens need to be aged 18 or older in order to vote.

According to polling data, the older the voter the more likely they were to vote Leave. In fact, the younger generation voted overwhelmingly to Remain, with more than 70 per cent of under 25s voting to stay in the EU. In comparison, 58 per cent of over-65s voted to leave the EU.

In the 2014 Scottish independence referendum, 16 and 17-year-olds were permitted to vote. As a result, many teenagers are calling for their right to vote in “the most important decision of their lives.” More than 17,000 people have signed a petition calling for the teenager’s right to vote is such a historic and monumental decision.

“This protest is for the unheard voices of 16 and 17 year olds around the United Kingdom, whose future was decided by people who did not have their best interests at heart,” organizers Issy Anthony and Ariane Artemise Trueblood wrote on Facebook.

“Whether you support leave or remain, this protest is to show the government our outrage that we have no say over something that will impact our future the most, and to try and persuade them to hold another referendum, one where 16 and 17 year olds will be allowed to vote.”

This Article (March for Europe: Thousands of Protesters Take to the Streets of London to Rally Against Brexit Vote) is a free and open source. You have permission to republish this article under a Creative Commons license with attribution to the author and AnonHQ.com.