Maria Farmer one of the earliest victims of Epstein claims, Ghislaine Maxwell told her the Rothschilds were the greatest protector of her family and that Donald Trump, the Clintons, and Alan Dershowitz were all involved.

Maria Farmer shared new details about her time spent with serial pedophile Jeffrey Epstein, as well as who she believes is protecting Epstein’s longtime confidante, Ghislaine Maxwell, the Rothschilds family with journalist Whitney Webb during The The Last American Vagabond podcast on April 21st, 2020. Farmer is alleged to be the first victim of Jeffrey Epstein after she first reported her story to the New York police and FBI as early as 1996.

Since 2019 after Epstein’s arrest and subsequent untimely death, Maria Farmer has begun speaking more openly about her abuse at the hands of Epstein and his network. As well as the abuse of her then-15-year-old sister, Annie. Farmer. Maria stated in the interview with journalist Whitney Webb that the abuse took place at the million-dollar estate owned by Epstein’s financier and former friend, Lex Wexner, CEO of the Limited Brands and Victoria’s Secret. Farmer alleged that she was abused by both Epstein and Maxwell during this time period.

Farmer provided new details of her time with Epstein and claimed that the FBI and corporate media were failing to tell her tale. In the recent interview with Webb, Farmer details how she often saw a number of important people specifically naming — Donald Trump, Bill and Hillary Clinton, and Epstein attorney Alan Dershowitz associating with Epstein. Webb played the shocking audio from her interview with Farmer on The Last American Vagabond podcast.

“The worst part was I named everyone. I named everyone who I thought was a co-conspirator at the time. So I named Alan Dershowitz, Donald Trump, absolutely the Clinton’s,” Farmer stated in the audio clip. “These were people that I saw coming and going, that I knew were a part of it. I made it really clear that this was a very scary thing for children and I see between 5-10 girls a day going upstairs.”

Farmer further stated that Maxwell grew up with the British Royal family, providing photo evidence of the apparent lifelong relationship. “She says to me, my dad was a very powerful man. She had a french passport, English passport, Israeli passport, and an American passport,” Farmer stated about Maxwell and her deceased father Robert Maxwell, himself a suspected agent of British or Israeli intelligence agencies.

In the momentous monstrous revelations, Farmer fingered the Rothschilds stating they protect Maxwell.

“Later when she was talking to me she says, the Rothschilds were the greatest protector of her family,” Farmer told Webb in the recording. Farmer added that she has even received death threats from the Rothschild family. She also claimed that she believed Maxwell was being hidden in the UK, something we now know to be false.

Farmer also claimed during the interview that Vicky Ward, a former writer for Vanity Fair who now works for CNN, harassed her family after Farmer shared her story. According to Maria Farmer, Vicky Ward told Epstein’s associate and co-conspirator Ghislaine Maxwell about her attempts to expose the sexual abuse carried out by the pedophile ring.

Farmer expresses that Epstein’s maids were almost all Filipino and further claimed the women had been trafficked in from the Philippines. In the interview, Farmer tells Webb that she witnessed 5 to 10 girls a day come through Epstein’s house questioning what happened to them, “Where are those girls?”

Farmer also discussed Les Wexner, Epstein’s wealthy financier and owner of the mansion in New Albany, Ohio where Farmer alleges she was abused and prevented from leaving the premise. Wexner has denied any involvement with Epstein’s activities and even claimed that he was a victim of Epstein’s misappropriating his finances. Farmer stated to Webb that when she spoke with the FBI she explained to them that Wexner was “the head of the snake”, but her warnings resulted in no action from authorities.

Webb noted to Farmer that “every time she went on mainstream interviews and mentioned Wexner they cut it out.” Even further, Farmer told Webb that Wexner was the head of the “Israeli Intelligence Central blackmail op” and that Ghislaine Maxwell answered to Wexner. Farmer also accused Wexner of collaborating with the CIA and Israeli Mossad. Farmer echoes a claim similarly made by Ari Ben-Menashe a former Israel Military Intelligence official that both Maxwell and Epstein were Mossad.

Webb previously exposed Epstein’s connections to the CIA and Mossad in a series of articles on the disgraced pedophile. In one article Webb interviews Bob Fitrakis writing, “Epstein and his only known billionaire “client,” Leslie Wexner, would later forge a business relationship with the CIA front company Southern Air Transport and play a major role in the airline’s relocation to Columbus, Ohio in the mid-1990s. During that period, two prominent Ohio officials believed that both Epstein and Wexner were working with the CIA, according to Ohio-based journalist Bob Fitrakis.”

Ghislaine Maxwell was arrested earlier this month, but many fear for her life due to the connections she has to rich and powerful people who were involved with the pedophile ring. Even the prison officials are worried she could be assasinated that’s why they are moving her from cell to cell. 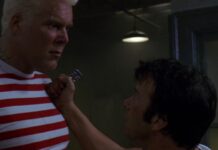