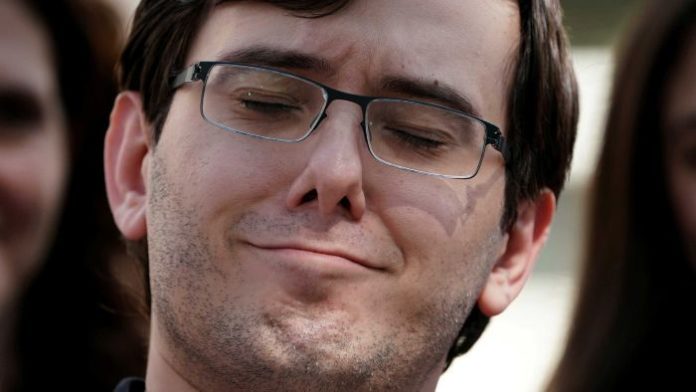 The “pharma bro” and convicted fraudster was sentenced Friday afternoon to 84 months hard time after pleading his case in dramatic fashion.

Martin Shkreli was sentenced to seven years in prison on Friday in a Brooklyn federal courtroom packed to the brim with reporters. The 34-year-old known as “pharma bro” hung his head in disbelief as Judge Kiyo Matsumoto cited his “egregious multitude of lies” and effectively brought a close to the saga of one of the most despised American public figures in recent memory.

Of course, years before he was a convicted fraudster, Shkreli had already been condemned in the court of public opinion. His national star-turn came in 2015, when he snatched up a rarely used but livesaving drug called Daraprim. Although drug patents traditionally expire after 20 years, massively consolidated drug companies rarely invest heavily into improving such medicines. With no generic competitors emerging to challenge him, Shkreli was able to charge whatever he wanted, and proceeded to jack up the price by 5,000 percent overnight.

shkreli is crying at his sentencing right now

Once he was notorious for price-gouging, Shkreli made alternating overtures between egalitarianism and greed. He assured me in an interview that the extra money was going straight into research and development that would make the drug safer, but also declared that he deserved to be rich.

More than anything else, though, the self-made businessman emerged as an interminable troll. In fact, he may have earned even more scorn for purchasing a one-of-a-kind Wu-Tang Clan album no one else could hear than for being the public face of drug-market exploitation. Both Bernie Sanders and Donald Trump called Shkreli out over his Daraprim mischief, but the entire internet lost its damn mind when he told me in an interview that he was thinking of putting Once Upon a Time in Shaolin on top of a mountain.

Ultimately, Shkreli didn’t—legally speaking, anyway—get his comeuppance for any of the things that made people hate him so much. Price gouging is still legal in the drug world, and the pharma bro would go on to claim sole possession of another hip-hop Holy Grail—Lil Wayne’s Tha Carter V. Instead, what got him indicted, convicted of three counts of fraud, and ultimately sentenced to hard time Friday was lying to fellow rich people.

The feds alleged that Shkreli tanked a couple of hedge funds, repeatedly misled his investors, and then paid them back with money he stole from his own drug company. His attorney countered by arguing that, because none of those investors lost money, no crime was committed—or at least no one really got hurt. Problem is, that isn’t how the law works, and Judge Matsumoto decided Shkreli caused losses of more than $7 million. If he can’t come up with the money, some of his rich-guy assets will be sold—including a brokerage account with about $5 million in it, as well as a Picasso painting and those two ultra-rare rap albums.

Judge Matsumoto revoked Shkreli’s initial bail in September after he offered a $5,000 bounty on a strand of Hillary Clinton’s hair. And although the convict told me soon after his indictment over two years ago that he wasn’t afraid of going to prison because it would be “like dorms,” he’s spent the past six months in the Brooklyn Metropolitan Detention Center, presumably hanging out with suspected terrorists and mobsters.

While he may have sung a different tune at the sentencing hearing Friday, Shkreli initially presented the whole case as a bid for attention by federal prosecutors in Brooklyn. “This is their fucking limelight,” he told me in 2016. “This is their chance to be gods, to be a rockstar, to be whatever it is—celebrated.”

Prosecutors said during sentencing that he deserved at least 15 years because they felt he showed no remorse. In closing statements, Shkreli’s lawyer, Ben Brafman, characterized his client as someone lacking certain social graces but begged Judge Matsumoto not to hand down a harsh sentence based on that. “I’ve gotten to know him quite well,” Brafman said of his past two years with the pharma bro. “There are times I wanna hug him and hold him and comfort him, and there’s times I want to punch him in the face.” He also presented a softer side of the pharma bro—one he said taught math to his fellow inmates—and touted his potential to do good in the world.