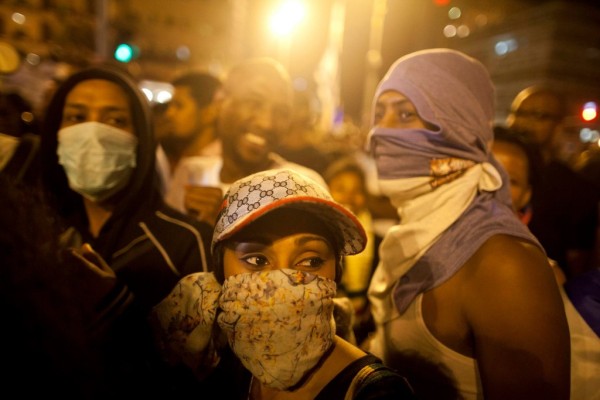 Police brutality in the United States has sparked a number of protests across the country. From what happened in Ferguson Missouri, to what is currently happening in Baltimore, it clearly brings the idea of the police as the protector of the public to disrepute.

For today, this police story is not taking place in any of the US’s towns or cities; the focus is on Jerusalem in Israel. The African-Israelis of Ethiopian descent have taken to the streets, after a video of an Israeli police officer beating an Ethiopian Israeli was leaked onto social media. According to reporters who covered the protest, the protesters numbered in the thousands and had rallied in the streets of Jerusalem demanding an end to racism and the brutal actions often meted out by the Israeli police against the African-Israeli community. Reporter-Ha’Aretz reports that the “Jerusalem Mayor Nir Barkat arrived at the scene and spoke to the protesters trying to lower the flames.”

He asked: “Do you doubt that the prime minister, ministers, and 120 Knesset members want to embrace the Ethiopian community?” One protester shouted back: “I don’t want a hug. Look at me as you would look at a white person. I don’t need a hugs. That is a patronizing attitude that says that I’m incapable, so let’s give him a hug.”

The video which caused the protest was said to have been recorded in the city of Tel Aviv, a suburb of Holon, where the police officer brutally beat the African-Israeli.

The video clearly showed one police officer pushing an Israeli soldier of Ethiopian descent. The man hits the ground, and only seconds later a second officer enters the scene and proceeded to beat the soldier without any provocation. The man being beaten was later identified as Demas Pakada, a soldier in the Israeli Defense Force.

The protests were centered around the entrance of the national Israel Police headquarters in Jerusalem, and more than 40 of those who had demonstrated were reported injured from clashes with police. The protest spread to the residence of the Prime Minister, who could not sleep and was forced to make a statement on the incident to calm protesters down.

“The police will do whatever it takes to correct itself, but we need to fix Israeli society,” Prime Minister Benjamin Netanyahu said. He also called the violent protests a result of genuine distress by the African-Israeli community. He later also met with Pakada and assured him that the matter will be investigated. The Israeli President-Reuven Rivlin has admitted that the Israeli society has erred when it comes to the plight of Ethiopian Jews in Israel.

The chairperson of the Jewish Agency, Natan Sharansky, also said in a statement that he called on all Israelis to listen carefully, and help foster a more constructive discourse. They should be willing to improve the situation in a real and tangible way. From these statements, clearly, the African-Israelis have been wronged in several respects in Israel because of their skin color. What we are seeing now is a face-saving attempt by the Israeli authorities. Already, the country is sharply divided by party politics. The government is facing lots of trouble in the conflict that has already killed many innocent Palestinians last year. We all look forward to see how Israel will hold itself together now that the police have decided to mistreat a broad section of its own citizens.