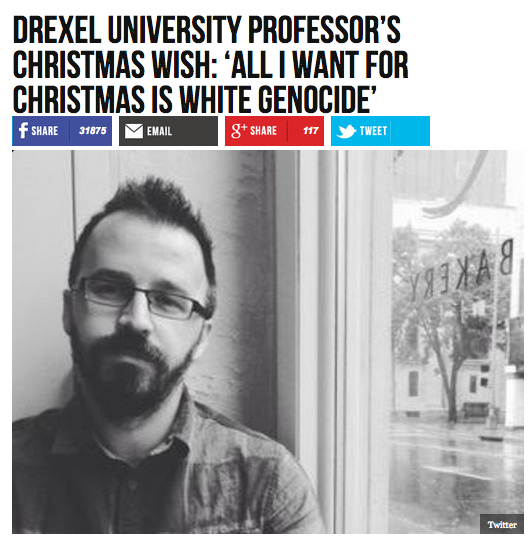 Remove all ads by clicking here
By Adam Johnson at fair.org

A “Twitter controversy” broke out on Christmas Day after leftist Drexel University professor George Ciccariello-Maher tweeted out, “All I Want for Christmas Is White Genocide” to his 11,000 followers. The tweet–since deleted–was a play on the white supremacist myth of a “White Genocide,” a canard that whites are under threat from interracial dating and diversity.

Online Nazis (sometimes euphemistically referred to by their prefered marketing descriptor, the “alt-right”) quickly pounced. The faux Twitter outrage was further stoked by the far-right online tabloid Breitbart (12/25/16), which ran the story without any of the essential context (though it took the opportunity to denounce Venezuela’s “communist government,” for some reason). Before one could catch up to the substance of the “controversy,” it was asserted to be a controversy as such.

Much like George Hamilton is famous for being famous, “Twitter backlash” stories are often controversial for being controversial. So long as enough people are tweeting outrage—regardless of their motive or Nazi status—the story becomes one through sheer assertion. Someone is “under fire,” “provoking outrage,” causing “backlash”—no matter if this fire or outrage or backlash is merited, or sincere. What matters is there’s controversy, and this must be breathlessly covered.

In an effort to “both sides” the issue, corporate media indulged racist concern trolling over what, as anyone familiar with the term knows, is a white supremacist panic. Those stoking the outrage, namely Breitbart and hordes of online Nazis, know that the term means interracial relationships and diversity programs, not an actual genocide. Rather than investigate the outrage, its motives and its proper context, most media outlets—and, initially, Ciccariello-Maher’s employer Drexel University themselves—reflexively framed the issue as a leftist professor literally calling for genocide, without noting the cynical origins of the controversy.

As FAIR has noted several times before, headlines matter as much if not more than article text. 60 percent of Americans don’t read past the headline, and the same percentage share articles on social media without actually clicking on them. People’s impressions are formed by how issues are framed—how they are initially presented—and from scanning these headlines one is given the impression Ciccariello-Maher is a pro-genocide zealot:

It isn’t until three or four paragraphs down in most of these articles that they explain what “white genocide” actually means and the satirical nature of the tweet is dissected.

But the dubious attempt at balance didn’t stop with the headlines; the articles themselves were sometimes embarrassingly tone deaf. International Business Times (12/26/16) put on its Serious Journalism face to write this line:

It’s unclear if he was calling for the mass killing of whites.

Except it wasn’t unclear. Anyone who can take four seconds to google what “white genocide” means knows Ciccariello-Maher was not calling for the killing of one billion people. Common sense and the most basic due diligence are thrown out of the window in the interests of false balance.

A Drexel University professor has been summoned to a meeting with school officials after he tweeted a Christmas Eve message that appeared to support “white genocide.”

Appeared to whom? Most of the Nazi trolls know what the term meant, and thus understood the irony of it. Breitbart is in the outrage exploitation business, and likely didn’t actually think he was calling for gassing whitey. So to whom did this “appear”? Probably not the AP reporters, who went on to explain its satirical purpose. A meta-outrage sets in: AP’s journalists are not misinformed about what the tweet meant, nor can they identify a specific party who is legitimately confused, so they simply assert that it may, perhaps, “appear” to support killing millions of people.

While some outlets eventually caught up to the scam (USA Today, Slate, Jezebel and, ultimately, IBT), by that point the damage was done: A college professor’s SEO legacy as an advocate of genocide was permanently imprinted on the internet. The knee-jerk, reflexive desire to “cover the controversy” rather than critically investigate it is precisely the radical centrism the Nazi trolls and their right-wing media allies were exploiting. Fake outrage long enough and it becomes real outrage, as corporate media get played by white supremacists on the altar of objectivity.

Adam Johnson is a contributing analyst for FAIR.org. You can find him on Twitter at @AdamJohnsonNYC.