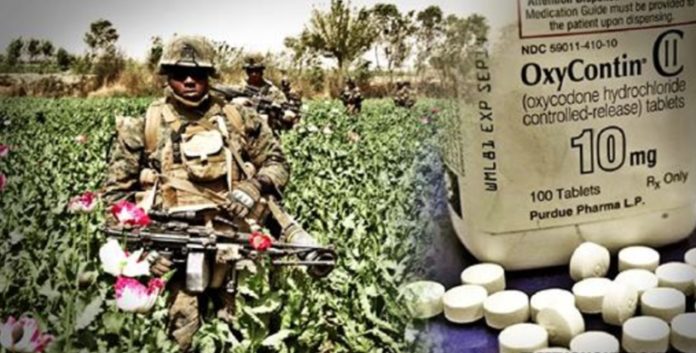 For many years now, the United States has been fighting, and losing, the violent war to end opiate, opioid, and heroin overdoses. As The Free Thought Project has consistently reported, opiate-related overdoses are now killing thousands of Americans per year, with no real end in sight. Our political foes know this and, according to Russia’s foreign minister Sergei Lavrov, the United States is using its own soldiers to protect the cultivation, production, and exportation of heroin from Afghanistan to other parts of the world.

As late as 2011, Moscow has been voicing its concerns over the drug trade in Afghanistan. Wikileaks published, as part of its Global Intelligence Files database, emails from Stratfor, describing Moscow’s criticism of U.S. foreign policy prohibiting its soldiers from destroying Afghani poppy fields.

Also in that same year, Lavrov was an attendee at a multi-national conference on Afghanistan, called the Kabul Conference. There he reportedly made the following statements against Afghani terrorism and drug production. “We are convinced…that the ISAF (international security assistance force), regardless of their withdrawal date, should boost the efficiency of their anti-terror and anti-drug efforts and brief the UN Security Council on the implementation of their mandate. A special focus should be placed on combating drugs production, something that stipulates the elimination of poppy fields and heroine laboratories. These topics should be on the radar of our working group that is already being formed,” Lavrov pointed out.

Later, in an interview in 2012, Lavrov called for NATO to begin destroying poppy fields in Afghanistan. From a Russian government transcription he stated, “For the time being, the terrorist threat has not been reduced, whereas the drug threat has been increasing and intensifying. In response to our numerous appeals, our NATO partners refuse to eliminate the crops of opium poppy, although coca plantations in Colombia are eliminated as a key direction of the anti-drug war. We are also concerned about the still insufficient pace of creating an Afghan.”

In 2011 and 2012, Lavrov’s comments were somewhat veiled and not directed specifically at U.S. foreign policy, reading more like a suggestion than an accusation. However, jumping ahead to 2017, and all thinly veiled comments, innuendos, and cultural nuances have now been cast aside, in favor of a more direct approach.

As late as last week, Lavrov’s comments are much more forthcoming and are aimed directly at U.S. officials. Lavrov recently spoke to senior military officers at Moscow’s Military Academy. After accusing the U.S. of using “managed chaos” tactics to increase U.S. influence in “Iraq, Libya, Syria, Yemen, and Afghanistan,” Lavrov leveled, one could say, heavy accusations against the U.S. and its foreign policy implementation.

“In the case of Afghanistan…the terrorist threat has not been rooted out, while the drug threat has increased many times over. The drug industry prospered,” he said referencing America’s failure to combat the heroin trade there. Accusing the U.S. of looking away while the country which produces 90 percent of the world’s heroin supply is equated to giving a free pass to the Afghanis to cultivate, manufacture and distribute heroin. “There is factual evidence that some of the NATO contingents in Afghanistan turned a blind eye to the illegal drug trafficking, even if they were not directly involved in these criminal schemes,” Lavrov stated implying the U.S. (being a part of NATO) might actually be involved in the drug trade.

If the U.S. is involved in the flow of opium into the country it may not come as a shock to some. As The Free Thought Project recently reported, infamous drug kingpin Pablo Escobar reportedly worked for the CIA running drugs into the country, according to his son’s new book. TFTP’s Claire Bernish wrote, “If the CIA trafficking cocaine into the United States sounds like some tin foil conspiracy theory, think again. Their alleged role in the drug trade was exposed in 1996 in an explosive investigative series “Dark Alliance” by Gary Webb for the San Jose Mercury News. The investigation, headed up by Webb revealed ties between the CIA, Nicaraguan contras and the crack cocaine trade ravaging African-American communities.”

Lavrov, historically speaking, has been very vocal of the U.S. and its complicit involvement in the heroin trade, which brings up an interesting point. If heroin and its derivatives are responsible for killing thousands of Americans each year, and the U.S. could have destroyed the source of the world’s heroin and chose not to, who’s to blame for the current epidemic separating parents from their children, creating widows, and addicting millions of Americans?