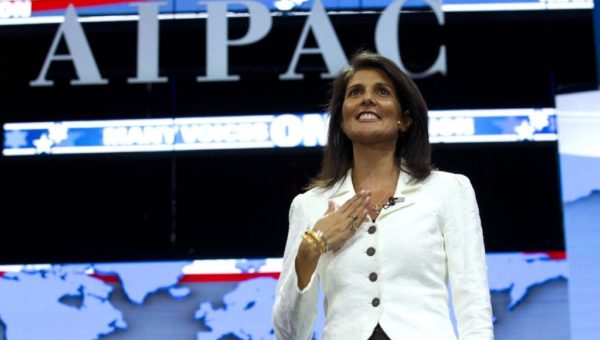 Haley is a known surrogate of Israel. During her days as the Governor of South Carolina, she was described as a puppet of Israel. As a governor, she signed a bill into law to stop efforts of the Boycott, Divestment and Sanctions (BDS) movement – a global campaign aimed at using economic and political pressure to stop Israel from repressing the people of Palestine. Haley believes that Israel should continue to violate the rights of Palestinians. In fact, this legislation was the first of its kind across the United States. Despite her lack of foreign policy experience, her love for Israel and hate for Palestine saw Trump nominate her as the country’s top diplomat to the United Nations. When Haley was nominated, she reportedly said “nowhere has the UN’s failure been more consistent and more outrageous than in its bias against our close ally Israel.”

This clearly shows Haley’s intent to represent Israel at the United Nations. Some observers predicted that her main duty was to ensure Israel becomes untouchable on the world stage. In December 2016, before the Trump administration took office, the United Nations Security Council voted overwhelmingly (Resolution 2334), demanding Israel end its illegal settlements on Palestinian lands. Per the United Nations rules, any of the permanent members – the United States, Russia, China, France and the United Kingdom – could have vetoed the resolution. The United States chose not to veto, but abstained during the vote instead.

The United States’ refusal to veto the resolution sparked outrage among extremist Zionists in both the United States and Israel, against the then outgoing Obama administration. Trump, then President-in-waiting, said he would never allow such a humiliation to befall Israel at the United Nations during his term.

The appointment of Haley by Trump to the United Nations is therefore a strategy to protect Israel, so that it can continue to kill and plunder the people and resources of Palestine. Haley is doing what she is expected to do at the United Nations. And without a shred of shame, she is now boasting about her wickedness in public.

During Haley’s address at the annual conference of the American Israel Public Affairs Committee (AIPAC) in March, she openly said UN diplomats are afraid to speak to her about Israel ending its illegal settlements on Palestinian lands.

“What I can tell you is everyone at the United Nations is scared to talk to me about Resolution 2334, and I wanted them to know that, look, that happened, but it will never happen again,” she said amid applause from the audience. In fact, Haley directed her words as a punishment, and to silence UN critics of Israel.

In February, Haley shocked diplomats when she blocked the appointment of former Palestinian Prime Minister Salam Fayyad to a senior United Nations post that was unrelated to Israel-Palestinian issues.

Haley told the audience at AIPAC that she saw the appointment of Fayyad as a “freebie” for the Palestinian Authority, and that her move was aimed at punishing Palestinians and the United Nations. As the audience roared to support her reckless speech, Haley continued, “We said no and we had him booted out. That doesn’t mean he wasn’t a nice man. That doesn’t mean he wasn’t good to America. What it means is, until the Palestinian Authority comes to the table, until the U.N. responds the way they’re supposed to, there are no freebees for the Palestinian Authority anymore.”

In early March, a United Nation-sponsored report authored by a group of scholars found “beyond a reasonable doubt” that Israel’s treatment of the Palestinians has risen to the level “of the crime of Apartheid.” “I wear heels. It’s not for a fashion statement. It’s because if I see something wrong, we’re going to kick them every single time,” Haley told the crowd.

Haley ended her irresponsible speech by vowing to transport her anti-BDS law she signed in South Carolina to the United Nations. She said: “With the BDS movement that we were able to stop in South Carolina, we’re going to continue to take that to the U.N. and make sure that they understand that is not what we need to be focused on.”

Prequel to the Palestinian apartheid

This article (U.S. Top Diplomat to U.N., Nikki Haley Vows Publicly to Silence and Punish Critics of Israel) is a free and open source. You have permission to republish this article under a Creative Commons license with attribution to the author and AnonHQ.com.