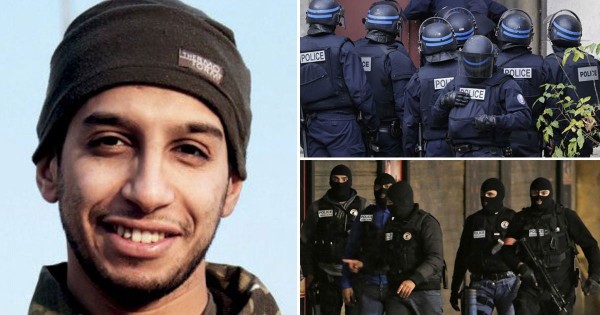 Abdelhamid Abaaoud was suspected of being the prime mastermind of the November 2015 Paris Attacks, which claimed the lives of about 130 people.

When the incident happened. and investigators managed to reveal the identity of Abaaoud, the whole of Europe was looking for Abaaoud, in order for him to account for the heinous crime he committed.

Abaaoud was born in Belgium, but he is of a Moroccan decent. Abaaoud reportedly fell deep in love with his cousin, Hasna Aitboulahcen. Both Abaaoud and Hasna came from broken homes, and it is said petty crime, drug and alcohol abuse defined their early adulthoods. When Syria became destabilized, with the emergence of the so-called Islamic State of Iraq and Syria (ISIS), the two adhered to the false teachings of the group that fighting and killing non-believers of the Islamic faith will serve as an atonement for their previous sins. That is what led Abaaoud and his cousin into the hands of ISIS.

After successfully planning the attacks in Paris, Abaaoud went into hiding. His cousin shielded him from the police for days. But that is one side of the story. Whereas, Hasna aided Abaaoud to escape capture, on the other hand, there was woman who knew that Hasna was aiding Abaaoud.

This unnamed woman, due to her personal security, is a Muslim and had close ties with Hasna. Reports have said she served as a surrogate mother for Hasna. She got to know the relationship between her stepdaughter and Abaaoud after the attack had happened, and Abaaoud was fleeing from the police.

The woman narrated that she and Hasna met Abaaoud secretly, after the attack had been carried out in Paris. She said it was when they met Abaaoud that she recognized his face – Abaaoud’s pictures had been circulated on television and social media, claiming he was a wanted man in connection to the attacks. Hasna went with Abaaoud to her neighborhood, Seine-Saint-Denis, a suburb of France, to provide cover to her lover. But her stepmother had other ideas. She couldn’t support a person who had committed such a crime.

Contrary to the false believe of some Western right-wing politicians like Donald Trump, and Ted Cruz, that all Muslims aid and abet terrorism activities, this woman set the records straight. She went straight to the police and informed them that the most wanted man they were looking for, was hiding in her neighborhood.

According to the Washington Post, the woman provided the police with all intelligence needed to track down Abaaoud. The police raided the apartment Abaaoud was hiding with Hasna. After exchange of gunfire and explosives, the police overpowered the two, killing both of them inside the apartment.

Note that it was only the Post that took the trouble to dig deep, revealing how the police found Abaaoud hiding in France. The French police also provided the Post with the details of the woman after making sure that her security wouldn’t be compromised.

The woman told the Post her motivation for exposing Abaaoud. She was quoted in an interview as saying “It’s important the world knows that I am Muslim myself. It’s important to me that people know what Abaaoud and the others did is not what Islam is teaching.” Thus, this woman proved many Islamphobians in the West that not all Muslims are terrorists. Not all Muslims support terrorism. It will interest you to know, that when the action the woman took became public, the so-called leading media outlets in the world kept silent.

They pretended as if nobody aided the police in the track down of Abaaoud. The media only reported the death of Abaaoud and his lover, neglecting the important role this devout woman played.

It is a fact that Muslims make up the overwhelming majority of the victims of terrorism. So, why should they support something that is claiming their own lives? It does not make sense. It is time for us to have a different mentality and perception about our brothers and sisters in Islam. Salaam (Peace) to the world.

This article (What the Media won’t tell You:  It was a Muslim Woman Who Turned in the Paris Attacks Mastermind to Police) is a free and open source. You have permission to republish this article under a Creative Commons license with attribution to the author and AnonHQ.com.