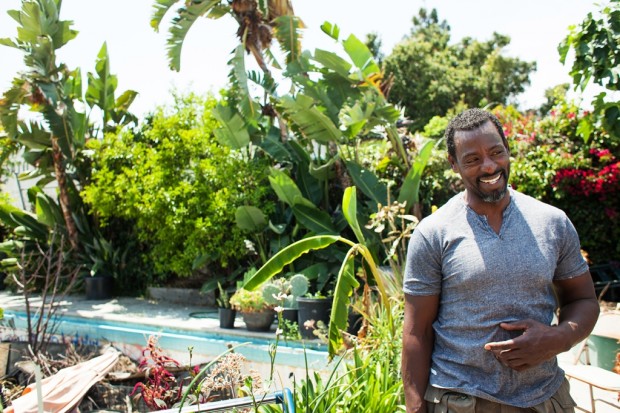 Today, we are featuring Ron Finley on Anonymous Headquarters because of his inspirational work over the last few years. Ron Finley is pursuing an ambitious project in South Central, Los Angeles (LA) by growing a ‘food forest’ to inspire people to eat what they themselves grow rather than eating foods from sources unknown.

By food forest, we are referring to a piece of land that grows lots of various food stuffs that almost look like the Amazon rain forest. The natural scenery of Ron’s food forest is just unimaginable.

Let’s start back at the beginning… before he was able to grow this forest full of food, he had to pay a price. Ron began his ambitious project some 10 years back, having become so sick of driving several kilometers for healthy food, he decided to plant a few herbs in a space between the sidewalk and the road. He was quickly arrested by LA city authorities and charged with ‘illegal use of public space.’

But Ron fought the law and, unlike the song, he won! He then decided to expand his project and began planting bananas, carrots and other fruits. Soon, he had almost all the food he wanted. Ron then decided to let people know how the food they eat affects their health.

“I planted a carrot and all hell broke loose. It was almost ok; we got a black man with a carrot in the ground in South Central. We need back up. People ask me what was my inspiration and I told them is cancer, diabetes, asthma and so on. We don’t know where our food comes from nor do we care,” he told NBC in an interview. Ron Finley said he wants to give his neighbors the opportunity to eat local, healthy food. That’s not so easy in south LA, where there are over 1000 fast food restaurants. Statistics in LA on health shows that one in seven people have diabetes and one in three children is obese. Ron explained that this is a compete disgrace to his community and that it inspires him to continue doing what he is doing.

“I call them food prisons because you literally have to break out of these situations to get anything healthy. For me, the whole urban gardening thing is about art. I want everyone to be able to design their own life,” he said.

Today, Ron has acquired an acre of land behind an old public library and he has grand plans for it. He has grown lots of food and the place looks almost like a forest in the middle of the city.

“I don’t even want to call it an urban community; I just want to turn it into a food forest, it’s going to be the most healing, sexiest garden in America. The land is already attracting bees, hummingbirds, people who want to eat fresh for free and lots of small children who are learning about nature for the first time. I don’t grow food, I grow people,” Ron explained. On his personal website, he has asked people to join him and expand the project:

“Join Ron as he embarks on his next project: igniting a (horti)cultural revolution! Ron envisions a world where gardening is gangsta, where cool kids know their nutrition and where communities embrace the act of growing, knowing and sharing the best of the Earth’s fresh-grown food. Ron is realizing his vision for community gardening and rejuvenation. Let’s grow this seed of urban guerrilla gardening into a school of nourishment and change. Help spread his dream of edible gardens, one city at a time. It’s time for Americans to learn to transform ‘food deserts’ into ‘food forests.’ Help them learn to regenerate their land into creative business models. Let’s make Ron’s philosophy mushroom across the country and the world.”

You can support what Ron is doing by visiting his personal website: http://ronfinley.com/?page_id=5

And remember the African proverb: the person who climbs the good tree needs to be pushed. No amount is too small!