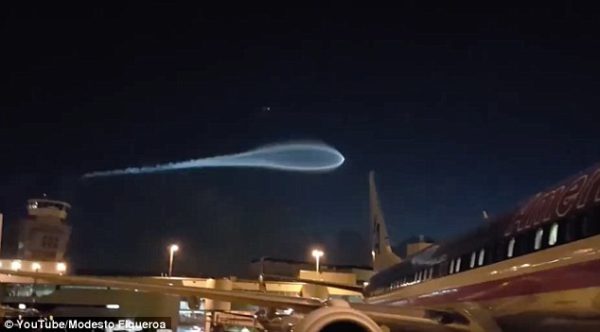 A strange video, believed to have been recorded some time in September 2015, has now gone viral on social media; where a strange object is seen flying in the sky of the city of Miami in the United States.

The strange object was recorded by airport workers in the city. The workers are seen standing near an aircraft belonging to American Airlines, yelling at the object.

The workers look remarkably shocked at what they were seeing, deciding to record it for evidence. In the United States, some people in the past have told stories of how they have spotted strange objects in the sky, leading them to believe in the highly contested issue of Unidentified Flying Objects (UFOs), which has been in Western public discourse for decades. In this video, the workers are voicing their shock, as the strange object – which looks sky-blue – moves in the clouds. Those on the tarmac shouted, urging their colleagues to look at the strange giant object as it flies across the sky.

One of the witnesses was heard shouting in the video to his colleagues: “Check that out, woah, it’s going to hit the plane.”

As the strange object continued to quickly move, many of the workers also used their mobile phones to capture the event before it disappeared. When the video was posted on social media, many people expressed their opinion, trying to give explanation to what the strange object could possibly be.

One man said the object was from space, and that it was a possible invasion by intelligent beings from space. Another suggested the possibility of the object as a comet fragment, with a high content of water and frozen gasses. Yet, another person said it is a rocket launched in the state [Florida rocket launch]. Many audiences seemed to have agreed with this suggestion. A support of the assertion explained further, that the plume is from a hydrogen powered rocket engine, where water vapor condenses in the high altitude, thus forming a cloud of ice crystals. This in turn, reflects light from the sun, which from the viewpoint, is below the horizon.

However, from what we gathered, the assertion that the strange object could be a rocket launched, may be wrong.

On June 24 this year, the United States Defense Department announced the launch of the Atlas V rocket from Cape Canaveral Air Force Station, in Florida. But the video was recorded in September 2015, at which period there was no known launching of a rocket in the state.

Since the video appeared online, city officials of Miami have not yet commented, nor attempted to explain what the strange object was. There has been no explanation given from the state or federal officials. Residents are left wondering what the object was.

Below is the video of the strange object. Watch and tell us what you think it is. Your opinion might lead to the unravelling of the mystery surrounding the object. We are also still investigating the object, and will update you with the latest.

This article (Miami Airport Workers Record a Strange Giant Object Flying Across the City During the Night [Video] ) isa  free and open source. You have permission to republish this article under a Creative Commons license with attribution to the author and AnonHQ.com.