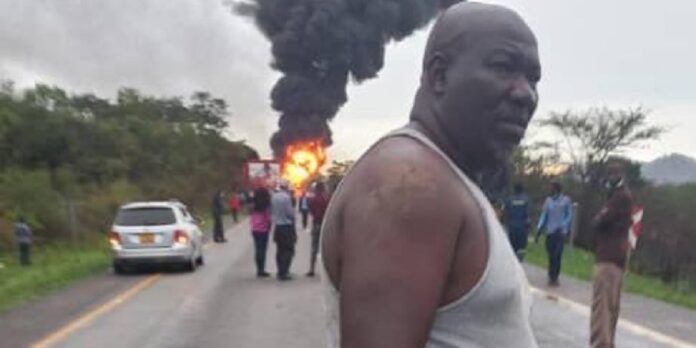 On Christmas eve,  social media platforms were awash with pictures of a burnt and bruised Kadoma truck driver Sirizani Butau.

The accident happened after a fuel tanker collided with a bus, which was coming from Harare, Zimbabwe.

The fatal accident occurred between a popular leisure spot dubbed Romeo’s and a tollgate along Mutare Harare highway claimed five lives whilst 60 others were injured.

Butau got props from all corners of the southern African nation as he was one of the first responders to the accident and managed to save the lives of several passengers who had been trapped inside the bus from being burnt.

“Let me take this opportunity to appreciate Sirizani Butau who saved people from the Mutare accident. As government will honour him for his selfless sacrifice,” Mnangagwa said.

In a statement Sunday on condolences Mnangagwa said he was impressed by life-saving efforts demonstrated by Butau and others after the traffic mishap.

“In wishing a speedy recovery to all those recuperating from injuries and burns from this horrific traffic accident, I am heartened by the life-saving and public spiritedness shown by other road users and communities who witnessed the fatal mishap.

“In particular, I was struck by outstanding bravery of one of our citizens, Sirizani Butau, who sacrificed personal safety to help with the rescue effort, in the process sustaining several burns and injuries,” he said.

Mnangagwa added: Without him and many others who rose to the occasion, many more lives could have been hurt or even lost. Our nation honours such great deeds which should never go unnoticed and unappreciated. Indeed, these deeds cultivate and impart great compassion to our Nation, this confirming our humanity as people.”

Three people were burnt on the spot of the fatal accident beyond recognition.

As of Saturday official information stated that at least 40 people who were admitted at Victoria Chitepo Provincial Hospital have since been discharged.

Several occasions have pledged to provide their products to Butau as an appreciation for his life-saving efforts after the horrific accident in Mutare.