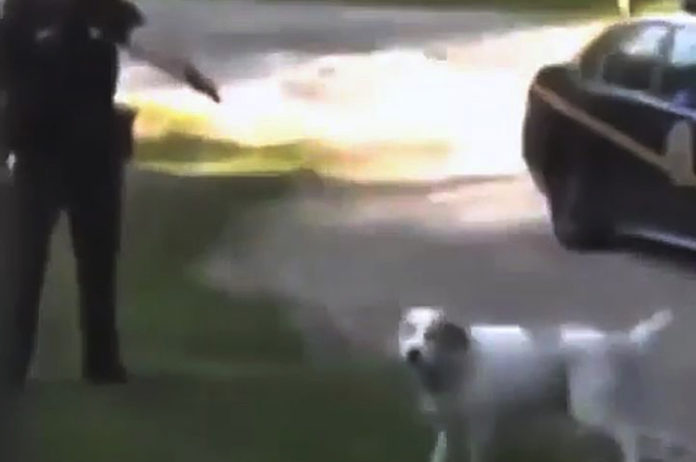 Mom that was arrested for saving dog from being murdered by a cop was finally found not guilty.
Tiffanie Hupp, a resident of West Virginia, was thrown to the ground and arrested last year by state troopers after she stepped in between her dog and a state trooper that had pulled his gun and aimed it at the dog. She was charged with misdemeanor obstruction and, despite video evidence showing that she had committed no crime, the case was not dismissed and went to trial nearly a year later.

Perhaps one of the saddest parts about the police brutality that has come to light in recent years is the brutality against animals. Videos have surfaced that reveal law enforcement murdering dogs simply because they were barking at them or even just because they approached them and wanted to sniff them. Trigger-happy cops with no regard for animal, and probably human, lives are consistently killing living beings because they have the power to do so and know that they will not face any consequences.

This is the case with Tiffanie, as she was the one arrested and charged with a crime while the state trooper, after aiming his gun at a chained, helpless dog and lying under oath in court about it , faced no charges or punishment.

The trooper approached with gun in hand, grabbed her by the arm and slammed her to the ground. After the troopers realized that they had been filmed, they entered the home illegally without warrant or probable cause and confiscated all digital devices including my 4-year-old grandson’s tablet. We only recently received the devices back and released the video.

The state troopers were in the area because the owner of the dog, Cliff, had called them after a neighbor had made threats towards him. When the state trooper approached the house, Buddy the dog approached while on a chain that did not reach the state trooper and barked a few times while wagging his tail. The dog had already stopped advancing towards the state trooper by the time Tiffanie arrived to get in between them. It was at that point that the state trooper grabbed Tiffanie by the arm and threw her onto the ground, ultimately pushing her to the cop car and arresting her.

To make matters worse, after this traumatizing ordeal and unlawful seizure of their devices, the city appointed Tiffanie with a public defender who is married to a state trooper and clearly biased. Luckily, David Schles, an attorney from Charleston, saw the video and heard of Tiffanie’s misfortunes. He extended her the offer to take her case pro bono so that she wouldn’t be stuck with a biased attorney.

Once the case went to trial, Tiffanie said that it was difficult to keep her mouth shut once the state trooper took the stand because of his outright lies. She said, “He told them I had a crossbow in my hand, that I stepped up to him, not in between (him and the dog), that I raised my hands at him first.” Fortunately, the video was clear evidence that none of this was true and the jury unanimously found Tiffanie not guilty after only a short deliberation.

The sad truth is that without the video as proof of the events that ensued, Tiffanie likely would have been found guilty based on the state trooper’s lies and a justice system that favors law enforcement.

Schles said, “Thankfully, if slowly, and inefficiently, the system can work and the jury made the correct decision and exonerated Tiffanie.”

Watch the video below (the state trooper begins to approach the house at 1:16) and tell us what you think! Comment below and share this article.