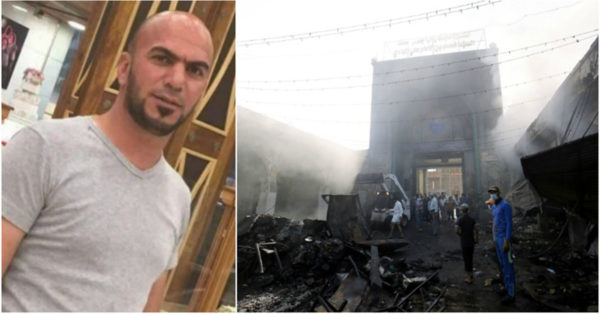 On 3 July, 2016, when the Muslim holy month of Ramadan was just about to end, coordinated bomb attacks were carried out in the Iraqi capital, Baghdad.

It resulted in mass civilian casualties. Some counts put the number of deaths at more than 300, with many more people sustaining injuries. The main area for the attack was the district of Karrada. The area is mainly populated by Shia Muslims, and the so-called Islamic State of Iraq and Syria (ISIS) target the area in order to kill the Shias. ISIS later issued a statement claiming responsibility for the attack. The group even identified the bomber as Abu Maha al-Iraqi. Observers say the Karrada bombing is the second worst suicide attack in Iraq by death toll, after the 2007 Yazidi communities bombings. It is also one of the worst in Iraq since the ouster of Saddam Hussein by the United States.

A few days after this devastating bombing in Bagdad, ISIS terrorists planned similar attacks in the city of Balad, about 80 kilometres north of Bagdad.

However, a local resident of the city, identified as Najih Shaker Al-Baldawi, saved the situation for the hundreds of worshippers at the shrine. Although Al-Baldawi died while saving other lives, he has become the hero of the city. According to the account of the story narrated by the Al-Manar News Agency, ISIS planned to attack the shrine in order to destroy it and kill as many worshippers as possible. The ISIS fighter assigned to attack the shrine reportedly disguised himself as a local militiaman. He managed to get access into the premises of the shrine, but as the suicide bomber was approaching the main area of the shrine where many people had gathered, the late Al-Baldawi noticed him. He physically stopped the terrorist from entering the shrine, hugging him before his explosive laden vest detonated, killing himself and the suicide bomber. It is said Al-Baldawi’s body took a direct impact of the explosion, reducing the death toll at the Shrine.

Due to the intensity of the blast, 37 lives were lost. Others also sustained injuries. However, it is said the situation would have been far worse than what happened on July 3 in Bagdad, if Al-Baldawi had not intervened.

Spokesman for the Joint Operations in Iraq confirmed the attack in Balad, adding that the sacrifice of Al-Baldawi helped significantly to reduce the number of casualties.

Since the death of Al-Baldawi, many local residents have taken to social media to pay tribute to him, and tell the rest of the world what he had done for his community. Some critical Western commentators have descended heavily on the mainstream media for not highlighting the selfless sacrifice made by Al-Baldawi to save many lives.

Writing on the Free Thought Project, the social critic, Matt Agorist  says the idea of a Muslim man saving lives by fighting ISIS extremists is damning to the Islamophobic narrative pushed by certain sects of the mainstream media.

Agorist believes that the narrative that Islam is a religion of death and destruction is completely false, and that anybody who would judge 1.6 billion people by the actions of just a few, is creating a narrative in which innocent lives are put in danger.

According to Agorist, when a Muslim hero saves hundreds of lives by jumping on a bomb, the Western mainstream should give prominence to such stories, so that people will realize that the majority of Muslims are against the few who have resorted to violence in the religion.

This article (Muslim Man Dies, Saving Hundreds of Lives by Hugging ISIS Suicide Bomber in Iraq) is  a free and open source. You have permission to republish this article under a Creative Commons license with attribution to the author and AnonHQ.com.