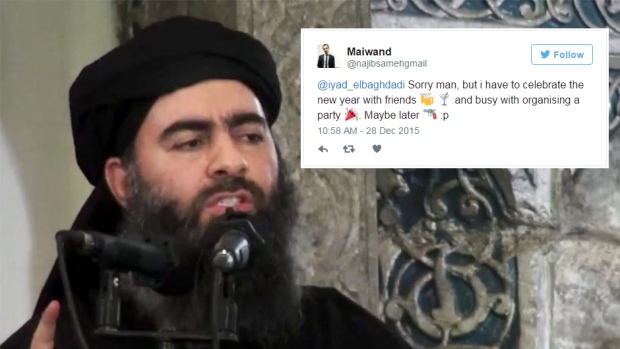 “Crusaders and Jews don’t dare to come on the ground because they were defeated in Iraq and Afghanistan. Be confident that God will grant victory to those who worship him, and hear the good news that our state is doing well. The more intense the war against it, the purer it becomes and the tougher it gets.”

Arab Spring activist Iyad El-Baghdadi, from the United Arab Emirates now based in Norway (and definitely not affiliated with ISIS), translated the recording and posted a series of tweets conveying ISIS’ message urging Muslims to rise together and defend the Islamic state.

ISIS’s leader’s message is basically “everything is OK despite everyone ganging up on us”.

ISIS leader: Western countries do not dare send their troops against us, that’s why they send apostates to fight us.

ISIS leader: We have not forgotten Palestine and you’ll see our moves in Palestine very soon.

ISIS leader: The war on the Islamic State is a war on Islam and Muslims.

ISIS leader: This isn’t just a new crusade, the entire world has joined forces against us. But don’t worry, our state persists and expands.

ISIS leaders: We urgently call upon every Muslim to join the fight, especially those in the land of the two shrines (Saudi Arabia), rise.

The call to the faithful, however, fell on deaf ears for most Muslims; ISIS got heavily trolled on Twitter.

Sorry mate, I don’t want to risk dying before the next Star Wars comes out. https://t.co/vvnbXmsMfK

@iyad_elbaghdadi damn dude…. I was on my way but then I saw the fuel prices. Send me money for fuel and I’m on my way.

Are you telling me I should join you rather than witness Leicester City win the league?? Noooo wayyyy! https://t.co/CqtIZBesM9

I urgently call upon every Muslim to join in ridiculing Baghdadi and his group of idiots. https://t.co/CqtIZBw4aJ

@iyad_elbaghdadi my mom is saying no. Could you come and ask her for the permission?

Sorry bro but currently 3 episodes in Fargo SE3 & the boys have football camp all of next week. Tue after next good? https://t.co/MqdIcN1Rjv

@iyad_elbaghdadi The Boxing Day Sales are on, don’t you remember!

@iyad_elbaghdadi Nah, I prefer to sleep in and binge watch shows on Netflix.

@iyad_elbaghdadi Sorry man, but i have to celebrate the new year with friends ? ? and busy with organising a party ?. Maybe later ? :p

@iyad_elbaghdadi My dad said I have to be home by 8pm. Will we be done by then?

@iyad_elbaghdadi I have a pregnant wife and I don’t want my child growing up in the kind of world you want to build. #youaintnomuslimbruv

El-Baghdadi joined in the fun, too; however, media outlets began to confuse El-Baghdadi with Bakr al-Baghdadi the ISIS leader.

ISIS’s leader urgently calls upon every Muslim to join his fight. But it’s late here. And tomorrow’s Sunday. Come on man, cut me some slack.

Maybe I should sue every media outlet that mistakes me for ISIS. Looks like a growth business. @indiacom

But then someone tweeted this infographic for El-Baghdadi, so no one should ever confuse him with al-Baghdadi again.

On December 28, Iraqi forces declared the city of Ramadi liberated from the Islamic State group and raised the national flag over its government complex after clinching the landmark victory. Ramadi, a predominantly Sunni Arab city about 110 kilometers from Baghdad, fell to ISIS in May. This Article (Jihad Can Wait! Muslims Twitter Users Have Fun Renouncing ISIS’ Call To Join Terrorism) is free and open source. You have permission to republish this article under a Creative Commons license with attribution to the author and AnonHQ.com.