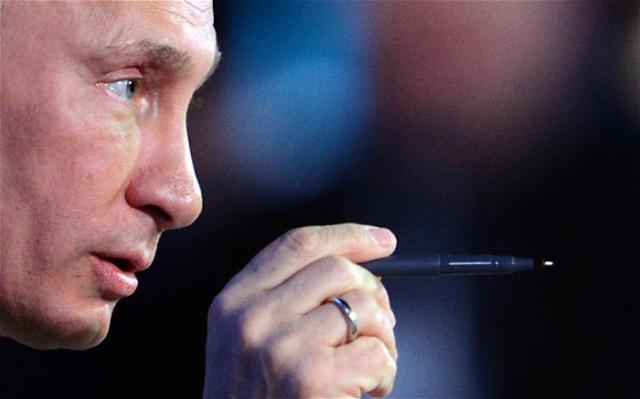 Russian President Vladimir Putin has just confirmed what former congressman and presidential candidate Ron Paul, and most of you, have been saying for quite some time now – that the American democracy and the American electoral system is rigged.

During a panel discussion at the 20th International Economic Forum in St. Petersburg last month, host Fareed Zakaria asked Putin what led him to call the Republican presidential candidate Donald Trump a ‘bright,’ ’brilliant’ and ‘talented’ person in December,  and whether he still has those views. In his reply, Putin not just destroyed the Western media for misinterpreting his comments (Fareed Zakaria is from CNN), he also took a swipe at the U.S. democracy and the way the presidential elections are being conducted in 2016.

Putin on the Trump Praise (which fueled speculation Russia would be pleased to see Trump in the White House):

“Why do you change the meaning of what I said? Why are you juggling with what I said? I said, in passing, that Trump is a bright (colorful) candidate. Do you not find him bright? I do. I did not ascribe any other characteristics to him. But what I did note and what I most certainly welcome is that Mr. Trump wants to restore full-fledged Russian-American relations. What’s bad about that? We all welcome this. Don’t you?”

On Favoring Trump over Clinton (Hillary says she will “take a tough line on Russia” if she becomes the U.S. president):

“We do not back anyone, it is not our business. Whoever is elected by the Americans is who we will continue to work with. Here’s hoping that this individual will want to improve relations with Russia and help build a more secure world… She [Clinton] probably has her own view on the development of Russian-American relations. But people change when they get in office, they speak differently, they even look differently because of their sense of responsibility. We act on the assumption that the sense of responsibility of the US head of state, the head of the country on which a great deal in the world depends today, that this sense of responsibility will encourage the newly elected president to cooperate with Russia and, I would like to repeat, build a more secure world.”

Putin on the U.S. Democracy (presumably referring to the elections of 1876 (Rutherford Hayes) and 2000 (George W. Bush) when the candidate who received the most votes did not win in the Electoral College):

“As a side note, America teaches everyone else how to live, with their lessons in democracy.  But do you actually believe the US elections are democratic? Twice in the US history was a president elected that had the most votes from super delegates, backed by the least amount of voters. Is that your democracy? And when we try to discuss this with our US colleagues – keyword is discuss, not criticize – they say “this is how we do it, and mind your own business”. Then how come you interfere in our business? Sort out your own issues first. But I agree that the US election really isn’t our business – despite the fact that there are reports of prosecuting attorneys shooing away international observers from US polling stations.” “The US is a superpower, and we accept this. The world needs a strong superpower country like the US, and we need it too. What we don’t need is their constant interference in our business, telling us how we should live, and getting in the way of Europe building their relations with us. The sanctions that you mentioned, do they affect the US? Not at all; they couldn’t care less about them. Our reactionary measures in response to Europe’s sanctions do not affect the US at all. Who do they affect? Europe! Nevertheless, the Americans tell their European counterparts to hang in there for a while. I don’t know why they should have to, but if they want to, ok, they can ‘hang in there’.”

This article (Must Watch: Putin Shows How American Democracy AND Presidential Elections Are Rigged) is free and open source. You have permission to republish this article under a Creative Commons license with attribution to the author and AnonHQ.com.