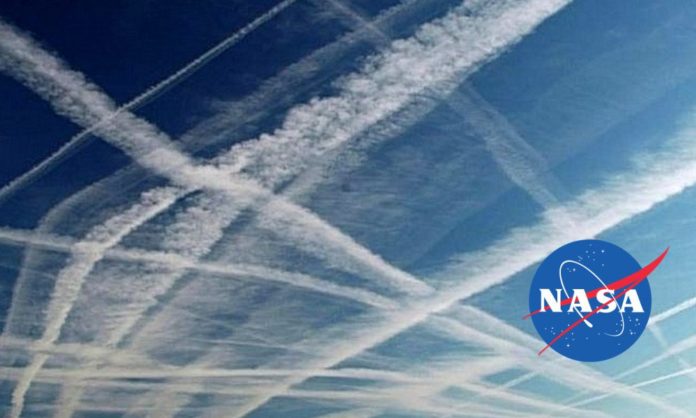 By Christina Sarich at State of the Nation

There’s the official explanation for why NASA is spraying lithium, a pharmaceutical drug most often used to treat people with manic depression or bi-polar disorder, into our ionosphere, and then there is the probable reason(s). It would be easier to accept NASA’s official explanation if they were not so secretive about everything they study and do in space – but one thing is for certain – NASA’s own personnel have admitted that lithium, along with other chemicals, are intentionally being placed into our environment regularly. It is possible that many of NASA’s own employees aren’t even aware of the true motivations for carrying out such a project, ironically displaying the very behaviors that these chemicals/pharmaceuticals are meant to instill.

In the first bomb-shell video a NASA employee ([email protected]) admits that lithium is being sprayed in the atmosphere, and says that it is “harmless to the environment.”

Before I give you NASA’s official explanation of why they are spraying psych-meds over hundreds of thousands of Americans, I’d like to point you to some references so that you can do your own research, and discover that this is no conspiracy theory. It is very real, and there is ample scientific documentation to corroborate what I put forth here:

A Pub Med abstract titled, Feasibility of Aerosol Vaccinations in Humans discusses how an increase in antigen volumes can be beneficial in aerosol delivery of vaccines, and could be used in “developing countries and disaster areas.” The abstract also admits that several thousand human subjects have already been aerosol vaccinated with live attenuated measles and influenza A vaccines. The executive summary further states that aerosol vaccinations are ideal for “large populations.” This has apparently been happening since as early as 2003.

Another discussion of aerosolized vaccinations can be found in The New England Journal of Medicine. A Randomized, Controlled Trial of Aerosolized Vaccines Against Measles states that these vaccines were tested on children in India that were as young 9 months old.

The World Health Organization has been researching aerosol vaccines for years now, as have “philanthropic” agencies which have clear aims to sterilize the population. It is also worth noting that the pharmaceutical industry has been absolved from any legal responsibility for medicating the masses since they were awarded  legal protection from all lawsuits by Congress in 1986. This law was challenged, but upheld by the U.S. Supreme Court in 2011. Many powerful agencies are making sure that we “take our medicine.”

In fact, many nations are participating in our unwitting, forced vaccination, and the dumping of any number of attenuated viruses, chemical concoctions and other ‘chemtrails’ on our heads with dogged frequency.

The Office of the Gene Technology Regulator (OGTR) considered giving a license application to PaxVax Australia (PaxVax) for the intentional release of a GMO vaccine consisting of live bacteria into the environment in Queensland, South Australia, Western Australia and Victoria. They planned to release cholera on their people.

According to the regulator, this GMO vaccine qualified as a limited and controlled release under section 50A of the Gene Technology Act 2000.

Of course, we can’t ignore the USA. Michael Greenwood wrote an article stating that:

“The incidence of human West Nile virus cases can be significantly reduced through large–scale aerial spraying that targets adult mosquitoes, according to research by the Yale School of Public Health and the California Department of Public Health.”

So, hopefully we’ve established that this IS happening. But why?

As more nations refuse genetically modified food, and refuse to drink fluoridated water, which has been named as a neurotoxin by one of the world’s premiere medical journals, the power structure that desires a complicit population has to figure out a way to alter our neurochemistry.

Lithium alters how we think by changing the levels of serotonin and norepinephrine secreted by our endocrine system. Lithium strongly alters the brain system, yet the NASA employee in the above video states that “it is not dangerous” and doesn’t harm the population. Even doctors who normally prescribe this medication for the mentally ill have said that it is dangerous because it is hard to figure out proper dosing. Surely, spraying copious amounts of lithium indiscriminately into the air via aerosols should be questioned – but here’s NASA’s official stance on this practice:

“The project is studying neutral and charged particles in the ionosphere and how each affects the way the other moves resulting in currents in the region. The variations matter because all of our communications and GPS satellites send signals through the ionosphere. A disturbed ionosphere translates to disturbed signals, so scientists want to know just what causes the ionosphere to behave in specific ways.”(NASA)

Meanwhile, should the over-medicated start to actually figure out what is being done to them, the government has imposed gag orders on the National Weather Service (NWS) and the National Oceanic and Atmospheric Administration (NOAA) who might easily refute the ridiculous claims of NASA. The US Navy admits to conducting electromagnetic warfare drills over the Olympic Peninsula. Reader submitted photo.

Notably, every single person who works for NASA, the NWS or NOAA are paid with tax payer dollars. This means that we are paying to be medicated and poisoned.

Here, to corroborate information being given by the NASA employee in the video, is the Code 8440 RMMO which states the exact purpose of using Wallops Flight Facility to launch a rocket containing lithium thermite:

“Purpose: The primary purpose of this mission was to test the loading methods for lithium canisters to be flown on the upcoming Kudeki (Kwajalein, April 2013) and Pfaff (Wallops, June 2013) missions, and verify their functionality under sounding rocket launch and space flight conditions.

We also learn from this specific call that lithium has been dumped in our skies since 1970. If you wanted to medicate the masses to create mindless, slave-like prisoners who didn’t even know they were imprisoned, this is surely a good way to do it. Spraying lithium into our skies, along with countless other bacteria, viruses, prions, parasites, fungi, carcinogens, toxins, hormone-altering drugs, anti-flora and anti-fauna, as well as gene-altering micro-dust is nothing more than bio-warfare against the world’s citizenry. You can call them chemtrails or something else, the effect is the same.

“The conscious and intelligent manipulation of the organized habits and opinions of the masses is an important element in democratic society. Those who manipulate this unseen mechanism of society constitute an invisible government which is the true ruling power of our country. …We are governed, our minds are molded, our tastes formed, our ideas suggested, largely by men we have never heard of. This is a logical result of the way in which our democratic society is organized. Vast numbers of human beings must cooperate in this manner if they are to live together as a smoothly functioning society. …In almost every act of our daily lives, whether in the sphere of politics or business, in our social conduct or our ethical thinking, we are dominated by the relatively small number of persons…who understand the mental processes and social patterns of the masses. It is they who pull the wires which control the public mind.” ~ Edward L. Bernays, Master Propagandist

Christina Sarich is a writer, musician, yogi, and humanitarian with an expansive repertoire. Her thousands of articles can be found all over the Internet, and her insights also appear in magazines as diverse as Weston A. Price, Nexus, Atlantis Rising, and the Cuyamungue Institute, among others. She was recently a featured author in the Journal, “Wise Traditions in Food, Farming, and Healing Arts,” and her commentary on healing, ascension, and human potential inform a large body of the alternative news lexicon. She has been invited to appear on numerous radio shows, including Health Conspiracy Radio, Dr. Gregory Smith’s Show, and dozens more. The second edition of her book, Pharma Sutra, will be released soon.

Source: State of the Nation

This article (NASA Confesses to Dosing Americans with Air-borne Lithium and Other Chemicals) was originally created and published by Waking Times and is published here under a Creative Commons license with attribution to Christina Sarich andWakingTimes.com. It may be re-posted freely with proper attribution, author bio, and this copyright statement.