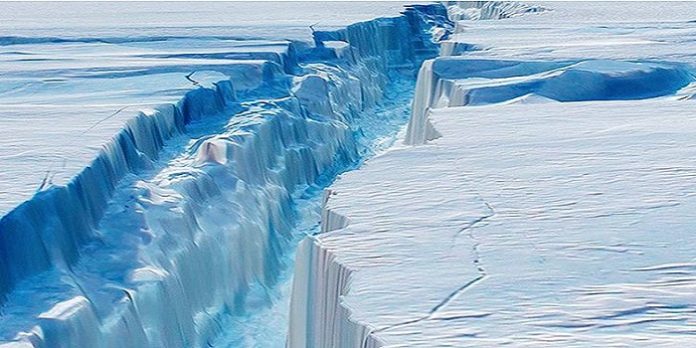 The 70-mile-long, 300-feet-wide and 0.3-mile-deep-rift in an Antarctica ice shelf, photographed by NASA’s IceBridge mission on November 10, is growing. Its scope is now threatening to produce an iceberg the size of Delaware and destabilize a larger area of ice about the size of Scotland. When the iceberg calving event happens, it will be the third-largest in recorded history.

The rift is likely to lead to an iceberg breaking off, which will remove about 10% of the ice shelf’s area pic.twitter.com/uu1KKWG0WP

The rift in Larsen C, Antarctica’s fourth-largest ice shelf, is expected to break off and create a 2,300 square mile iceberg, which will add another 4 inches to sea levels. According to scientists, the eventual calving of the Delaware-size ice sheet would remove between 10% and 12% of Larsen C’s surface area; it may even lead to the crumbling of the entire ice shelf. NASA explains:

“Ice shelves are the floating parts of ice streams and glaciers, and they buttress the grounded ice behind them; when ice shelves collapse, the ice behind accelerates toward the ocean, where it then adds to sea level rise. Larsen C neighbors a smaller ice shelf that disintegrated in 2002 after developing a rift similar to the one now growing in Larsen C. The crack completely cuts through the ice shelf but it does not go all the way across it – once it does, it will produce an iceberg roughly the size of the state of Delaware.”

View is of a rift in the Antarctic Peninsula’s Larsen C ice shelf from our airborne survey of polar ice: https://t.co/VgjxopHHLI @NASA_ICE pic.twitter.com/gt5mpHqbxn

It’s not unusual for ice shelves to calve large icebergs as snow accumulation gradually pushes old glacier ice out to sea. However, that process normally takes months to years, as cracks slowly form in the ice.

“It’s a large rift on an ice shelf whose future we are curious about. Inevitably, when you see it in satellite imagery or from a plane, you wonder what is going to happen when it breaks off. However, large icebergs calve from ice shelves regularly and they normally do not lead to ice-shelf collapse. The growth of this rift likely indicates that the portion of the ice shelf downstream of the rift is no longer holding back any grounded ice.”

MacGregor also revealed it may be “a month, maybe a year” before the ice block chips off. And when it does break off, he said, it will “drift out into the Weddell Sea and then the Southern Ocean and be caught up in the broader clockwise ocean circulation and then melt, which will take at least several months, given its size.”

This article (NASA Spots 70-Mile-Long 300-Foot-Wide Crack in Antarctica Ice Shelf) is a free and open source. You have permission to republish this article under a Creative Commons license with attribution to the author and AnonHQ.com.