by James Holbrooks at undergroundreporter.org  Brussels — Amid continued assertions about “Russian aggression” by NATO and its member nations — and coming just days after announcements that additional military assets will be deployed to Eastern Europe — a top commander of the alliance has just admitted that, in fact, the Russian threat is actually nonexistent.

“It is not the aim of NATO to create a military barrier against broad-scale Russian aggression,” General Petr Pavel, chairman of the NATO Military Committee, said on Monday, “because such aggression is not on the agenda and no intelligence assessment suggests such a thing.”

The admission stands in stark contrast to statements from other NATO leaders, who, as recently as mid-June, announced plans to deploy four international battalions to Estonia, Latvia, Lithuania, and Poland in the name of “defense and deterrence” against Russian action.

Defense Secretary Michael Fallon of Britain — one of the countries pledged to contribute to the military effort — stated at a press conference at NATO headquarters that the move sends “a very clear message that we are committed to defend the eastern flank. NATO is strong and united…We are ready to respond to any threat.”

Again, this statement contradicts what other top NATO officials are publicly saying.

“Russia could take over the Baltic states faster than we would be able to defend them,” General Ben Hodges — commander of U.S. ground forces in Europe — recently told German publication Die Zeit.

That assessment echoes what the commander told the BBC amid ongoing military drills in Poland earlier this month:

“The thing I worry about most is freedom of movement. Their snap exercises that they do, I personally am surprised each time they do it. And so you can see why that scares me.”

The Polish drills were part of a coordinated action that involved 31,000 troops from over twenty countries — what NBC called “the largest military exercises since the Cold War ended.”

Not surprisingly, Russian president Vladimir Putin expressed serious concerns on Wednesday about continued provocations by NATO forces. While speaking in Moscow on the 75th anniversary of Nazi Germany’s invasion of the USSR, the leader stated:

“In these conditions, we are obliged to dedicate special attention to resolving tasks connected with heightening the defense capabilities of our country.”

Considering the massive scale of the military buildup along Russia’s border — and in the face of conflicting and altogether confusing statements from NATO’s own commanders — President Putin’s concerns appear to be wholly justified.

Despite this common sense approach to national defense, however, the Russian leader’s words will no doubt be used as fodder to further the narrative of “Russian aggression” being touted by both governments and media outlets worldwide.

This article (NATO Commander Confirms: “Russian Aggression” Is Actually Nonexistent) is free and open source. You have permission to republish this article under a Creative Commons license with attribution to James Holbrooks andUndergroundReporter.org. If you spot a typo, please email the error and the name of the article to[email protected]. Image credit: Flickr/SHAPE NATO 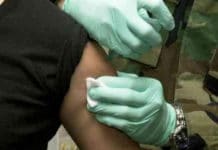