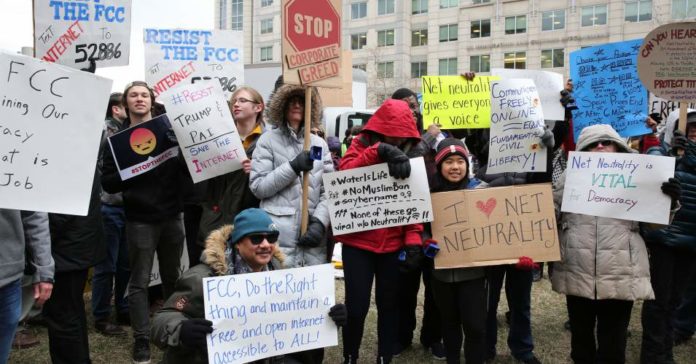 (Common Dreams) The nonpartisan First Amendment advocacy group Free Press vowed to take the Federal Communications Commission (FCC) to court Thursday after the Republican-controlled panel moved to gut net neutrality protections that prohibit internet service providers (ISPs) from charging for and discriminating against content, in a 3-2 vote along party lines.

The FCC just voted to repeal #NetNeutrality but the fight is NOT over. Tell Congress to use a “resolution of disapproval” to overturn the FCC’s vote: https://t.co/GU5IfEZOFr

Free Press and their many allies rallied outside the FCC headquarters in Washington, D.C. as the five commissioners prepared to vote on FCC chair Ajit Pai’s proposal to roll back the Obama-era protections. The protest represented the final push to stop the vote in its tracks, following hundreds of demonstrations outside Verizon stores across the country last week, Fight for the Future’s “Break the Internet” action earlier this week, and thousands of calls to members of Congress.

The two Democratic commissioners on the panel, Mignon Clyburn and Jessica Rosenworcel, met with protesters outside and issued powerful dissents ahead of the vote, with Clyburn noting, “The fight to save net neutrality does not end today. This agency does not have, the final word. Thank goodness.”

In addition to Free Press’s plan to sue the FCC, the group urged supporters to push Congress to nullify Pai’s plan using the Congressional Review Act (CRA), which allows representatives and senators to review new regulations and overrule them by passing a joint resolution.

Forty senators, including one Republican, have voiced opposition to the net neutrality rollback, while a handful of Republican representatives have said they disagree with Pai’s plan. But the loudest opposition so far has come from the public and groups like Free Press and Fight for the Future.

“Why are we witnessing such an unprecedented groundswell of public support” for net neutrality, asked Clyburn in her dissent. “Because the public can plainly see a soon-to-be-toothless FCC is handing the keys to the Internet to a handful of multi-billion dollar corporations.”

With the vote, ISPs like Verizon—Pai’s former employer—will no longer be prohibited from blocking or slowing down certain websites and content, and will be able to charge fees to web companies that can afford to pay them for access to an internet “fast lane,” leaving smaller sites struggling to reach audiences.

Despite comments from millions of Americans who spoke out in favor of the protections, Pai did not mention the widespread opposition to net neutrality in his order to repeal the rules. Last week, he refused to release documents related to potentially fraudulent comments left on the FCC’s public comment website.

The Trump administration lets down internet-users worldwide by scrapping #netneutrality This decision is a historic mistake, we need a level playing field, more fair competition on the open internet, more protection of consumers and more freedom of speech online!

There is no shortage of people who believe Washington is not listening to their concerns, their fears, their desires. Add the @FCC to the list.

Today’s decision to roll back #NetNeutrality is wrong and shows enormous contempt for public opinion.

BREAKING: The FCC just voted to gut all existing #NetNeutrality protections, allowing ISPs to control what we see and do online with new fees, throttling, and censorship. BUT THIS IS NOT OVER. We can overturn the FCC’s decision in Congress. Here’s how: https://t.co/xSJHbLq2Wn