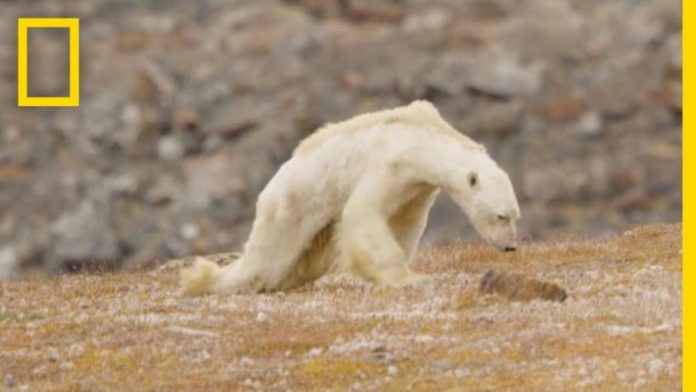 Last week, a video showing a starving polar bear in an abandoned fishing camp went viral sparking worldwide outrage. Paul Nicklen, National Geographic’s photojournalist, who had shot the video at Somerset Island in the Canadian Arctic for Sea Legacy, believed the bear was starving due to climate change.

But now, both the scientific community and people familiar with the area have raised serious doubt about the authenticity of the video and its significance.

Nunavut polar bear monitor Leo Ikakhik, who has been surveying the animal populations on the western shore of the Hudson Bay in Canada for the last seven years, told CBC Radio:

“I wasn’t totally surprised. These things happen. Mother Nature is going to do part of that. You know, it’s just part of the cycle. Everybody probably was shocked to see a really skinny bear, but this is not my first time seeing something like this. Since I’m from the North, I wouldn’t really fall for the video. I wouldn’t really blame the climate change. It’s just part of the animal, what they go through.”

Polar bear biologist Andrew Derocher believes the bear may have succumb to an aggressive form of bone cancer. He told The National Post:

“The video shows what appears to be an old male in declining health, but clear clinical signs of starvation aren’t obvious (e.g. convulsions). Bears can respond to improved conditions: We’ve followed bears that went from bone racks to obese over a few months.”

Margaret Wente, one of Canada’s leading colunits and director of the Energy Probe Research Foundation, wrote an opinion piece in The Globe and Mail arguing that one emaciated bear is not evidence of climate change:

“Most people are concerned about climate change – but they’re also rightly skeptical about activists who cry “wolf” (or, in this case, “polar bear.”) Fake news for a good cause can backfire and shred your credibility. That’s something nobody who’s concerned about the environment can afford to forget.”

“When the animal first got up and we could see that he was actually in the late stages of starvation. All of our team was in tears and feeling completely helpless to do anything about it except to roll our cameras and share it with the world… The point is that it was starving. As we lose sea ice in the Arctic, polar bears will starve.”

Melting ice is having a devastating impact on polar species. In 2007, the US Geological Survey estimated that the global polar bear population will shrink to a third of its current size by 2050, due to loss of habitat and less access to prey.