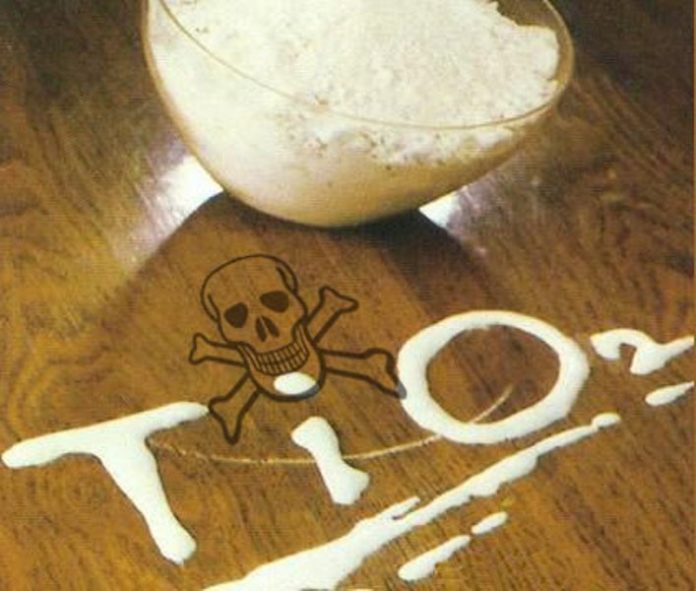 Food additives are substances added to food to preserve flavor or enhance its taste and appearance. Over the years, many health observers have expressed grave concerns about some of these food additives because the chemical compounds from which the additives are obtained have proved dangerous to human health.

There are many studies and commentaries pointing to the fact that food additives are harmful to human health. Although regulatory bodies around the world have largely ignored these concerns, some researchers are still providing glaring evidence. This time, the evidence is overwhelming and cannot be ignored. A new study by France’s National Institute of Agricultural Research (INRA) has revealed that an active chemical compound — Titanium dioxide (E171) — used in food and pharmaceutical products, causes cancer. Titanium dioxide is the naturally occurring oxide of titanium, with a chemical formula of TiO 2.

The study was accepted into the journal Nature,  and has sparked a huge concern among health experts in France. The additive E171, or titanium dioxide, is used for whitening of products and is found in sweets, chocolate products, cookies, chewing gum, and food supplements, as well as in pharmaceutical products and toothpaste.

Authors of the study wrote that the results of their study showed for the first time that E171 crosses the intestinal barrier in animals and reaches other parts of the body. The study was sponsored and financed by the French Agency for Food, Environmental and Occupational Health & Safety (ANSES) as part of the Nanogut project. According to the details of the study, the researchers exposed rats to regular oral doses of titanium dioxide through drinking water for 100 days. The researchers said they later found particles of the chemical compound in their livers.

The researchers also found that chronic oral exposure to the additive spontaneously induced preneoplastic lesions in the colon, a non-malignant stage of carcinogenesis, in 40% of exposed rats.

“While the findings show that the additive plays a role in initiating and promoting the early stages of colorectal carcinogenesis, they cannot be extrapolated to humans or more advanced stages of the disease. These results indicate that E171 both initiates and promotes the early stages of colorectal carcinogenesis in animals. They provide new data for evaluating the risks of the E171 additive in humans,” the authors wrote in the study. The IRNA said exposure to titanium dioxide is a concern, especially in children who tend to eat a lot of sweets. The body also said there should be closer scrutiny of the compound to avoid a devastating effect on the health of humans.

Meanwhile, the French government is taking the study very serious. The study was forwarded to the ministers of health, agriculture, and economy for review. After the review, the ministers recommended that ANSES investigate on the compound further.  ANSES has also announced that it would complete the investigation by the end of March 2017.

But as the French government is serious about discovering the full effects of E171 on humans; in the United States, the story is different. The country’s Food and Drug Administration (FDA) states that E171 should be consumed at levels of no more than one percent of the product’s weight. What is more appalling is information on E171 was last reviewed by the United States Food and Drug Administration in 1966. This article (New French Study Reveals Active Compound Used in Food, Tooth Paste and Pharma Products Causes Cancer) is a free and open source. You have permission to republish this article under a Creative Commons license with attribution to the author and AnonHQ.com.