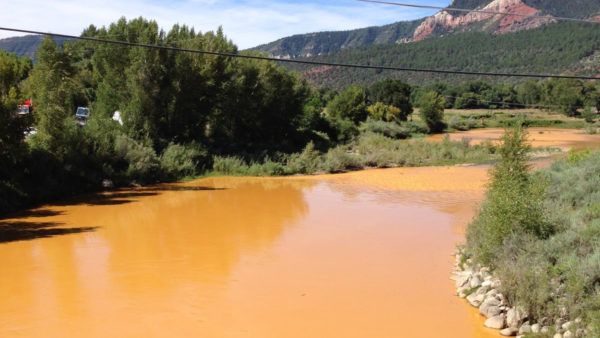 The State of New Mexico in the United States has officially sued the country’s Environmental Protection Agency (EPA) over the 2015 Gold King Mine disaster, which badly affected New Mexico and two other states.

On August 5, 2015, an abandoned gold mine near Silverton in the state of Colorado, spilled about 3 million gallons of toxic wastewater into the rivers of three states. Colorado, New Mexico and Utah were affected.

It is said the spillage was accidentally triggered by an EPA inspection team which was called there to inspect the mine’s leaks. The leaks had been polluting water bodies in the area. The EPA personnel went there with workers from the Missouri-based Environmental Restoration LLC, who the EPA had contracted to mitigate pollutants from the closed mine.

The spillage unleashed a torrent of yellow sludge that contained high concentrations of heavy and poisonous metals such as arsenic, mercury, lead and other deadly compounds. These poisonous compounds forced Colorado and New Mexico to declared a state of emergency respectively. The spill completely polluted the San Juan River and its northern tributary, the Animas River. Local residents living downstream from the mine, were advised to avoid drinking or bathing in water drawn from wells in the area. Two Colorado municipalities, including the city of Durango, and the New Mexico towns of Aztec and Farmington temporarily shut off their river intakes, which affected many residents.

Since the incident, the three states have been trying to get the EPA to settle the issue amicably, but the EPA, led by its administrator, Gina McCarthy, has been adamant to go to the negotiation table with officials of the states.

Therefore, on May 23, New Mexico took the first step by suing the EPA for the disaster. The lawsuit, filed at a United States District Court, also named Environmental Restoration, Kinross Gold Corp, and Sunnyside Corp as defendants in the case. New Mexico’s Attorney General, Hector Balderas, said in a statement issued with the 51-page lawsuit filed that the discharge caused widespread environmental damage and substantial economic harm to residents, farmers and local businesses, for which the state has not been compensated.

“The release of hazardous substances into waters that are the lifeblood of our economy and culture in New Mexico has had a devastating impact on our historical rural, agricultural and tribal communities,” Balderas said.

The lawsuit seeks reimbursement for cleanup costs and damages, as well as a court order requiring that the defendants take steps to prevent such spills in the future.

A spokesman for the EPA, David Gray, said he could not comment on the pending litigation in court, but confirmed that the agency had taken responsibility for the disaster. Gray also claimed that the EPA had already paid $1.3 million to reimburse New Mexico, along with other funds that had been allocated for cleanup and monitoring. In light of the EPA’s statement, the Libertarian Republic reports that New Mexico’s Environment Secretary, Ryan Flynn, has previously said that the EPA is using a recreational, rather than a residential water standard in the cleaning and monitoring process. The recreational standard allows more contaminants than the residential standard.

Mr Flynn had said in a statement: “Rather than joining our monitoring efforts, EPA instead cherry picks the data they choose to monitor and present, and then dodges accountability at every turn.”

According to American Rivers, the American non-profit conservation organization dedicated to protecting and restoring rivers in the United States, Colorado has more than 4,000 abandoned mines. It is said about 1,100 of them are located around the Silverton area. American Rivers describes the mines as ticking time bombs. Meanwhile, when New Mexico filed its lawsuit, Colorado and Utah have also said they are now considering following New Mexico’s lead to compel the EPA to do what it is supposed to do. We are following the case as it unfolds in court. Just stay with us for more updates.

This Article (New Mexico Sues EPA Over Gold Mine Waste Spill, Two Other States Also Considering Similar Lawsuit) is free and open source. You have permission to republish this article under a Creative Commons license with attribution to the author and AnonHQ.com