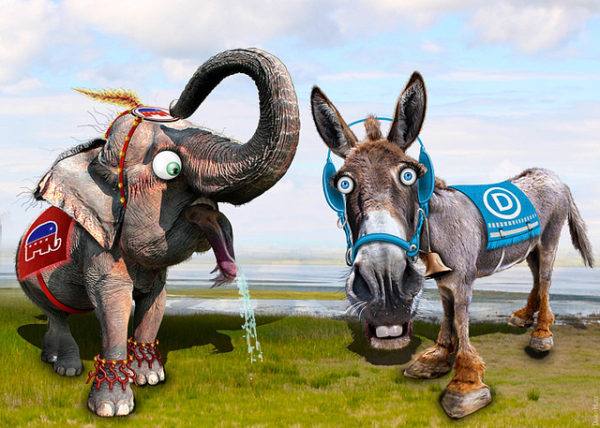 The American public perception about the political system of the country, worsens with each passing day.

In mid-May 2016, a poll conducted by the Associated Press (AP) news agency, in collaboration with the National Opinion Research Center (NORC) at the University of Chicago, revealed that 70% of Americans are disturbed about the country’s November presidential elections.

According to the details of the poll, seven in 10 people said they felt frustration in the upcoming presidential elections. In another poll, published in July 2016, a staggering 79% of the American population said their country will head towards the wrong direction under the leadership of Donald Trump or Hillary Clinton. This poll was conducted by the AP and GfK.

When these polls were published, observers said it was damning for the political system of the country. Many said both Trump and Clinton are the most unpopular presidential candidates in modern American political history.

However, in a latest poll focusing only on young people aged 18-30, views of the two-way political system of the United States displayed another grim result regarding politics in the country.

The poll conducted by GenForward revealed the majority of young Americans think both the Republican and the Democratic parties do not represent them. GenForward is a survey by the Black Youth Project at the University of Chicago, with the AP-NORC Center for Public Affairs Research. This is the first time the organization has conducted a poll focusing on the young generation. During the poll, special attention was paid to the voices of young adults of color, highlighting how race and ethnicity shape the opinions of the new generation in the United States.

Three-quarters, representing 75% of the respondents said Mr Trump is unqualified to be president of the United States. 50% also said the same about Clinton. According to the poll, more than two-thirds of young adults in the United States, including vast majorities of young Asian-Americans, Hispanics and blacks, said the Republican Party does not care about people like them.

Democrats fare slightly better among young people, overall. A small majority, around 53%, consisting of mostly African-Americans, Hispanics and Asian-Americans said the party cares about people like them.

But among young whites, majorities said both parties don’t care much about them. 58% held this opinion about the Republican Party, while 52% said same about the Democratic Party. Overall, only 28% of young adults said the two major parties do a good job of representing the American people. This means 72% believed the parties do not represent them. Also, young adults across the racial and ethnic groups are said to be mostly unfamiliar with the alternative candidates contesting for the November elections. Seven in 10 said they don’t know enough about the Libertarian presidential candidate, Gary Johnson, and therefore don’t have an opinion about him. Nearly 8 in 10 also said the same about Green Party candidate, Jill Stein. The poll was conducted between July 9 and 20, 2016. 1,940 young adults were chosen for the poll. The sample of the respondents was drawn from the probability-based GenForward panel, which is designed to be representative of the United States young adult population. The margin of sampling error for all respondents is plus or minus 3.8 percentage points.

The survey was paid for by the Black Youth Project at the University of Chicago, using grants from the John D. and Catherine T. MacArthur Foundation and the Ford Foundation. Respondents were first selected randomly using address-based sampling methods, and later interviewed online or by phone.

This article (New Poll Shows Majority of Young Americans Fed Up with Two-way Political System, Mock Trump and Hillary as Clueless) is a free and open source. You have permission to republish this article under a Creative Commons license with attribution to the author and AnonHQ.com.