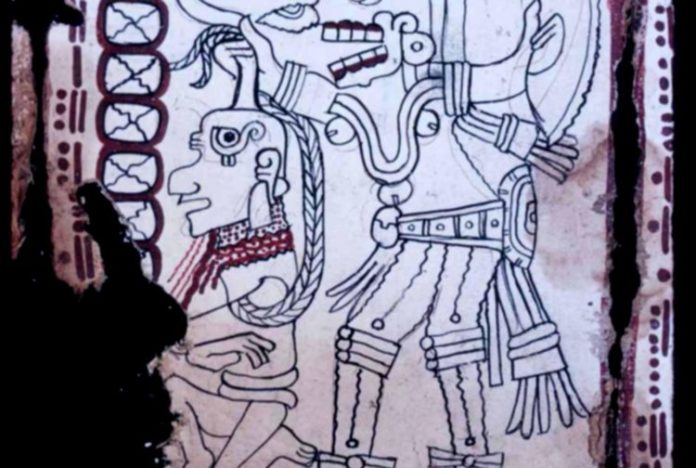 The Grolier Codex is a Maya book believed to have been written almost 900 years ago. Maya was a civilization developed by the Maya people. It is noted for its hieroglyphic script, the only known fully developed writing system of the pre-Columbian Americas, as well as for its art, architecture, mathematics, calendar, and astronomical system. According to archaeologists, the Maya civilization developed in an area that encompasses southeastern Mexico, all of Guatemala and Belize, and the western portions of Honduras and El Salvador. Also known as the Sáenz Codex, the Grolier Codex first appeared in a private collection in the 20th century. The Codex consists of a fragment of a Maya book, containing almanacs of Venus represented in a simplistic fashion. The Codex is said to have been recovered from a cave in the Mexican state of Chiapas in the 1960s, together with a mosaic mask and some blank pages of pre-Columbian fig-bark paper.

A Mexican collector named Josué Sáenz claimed a group of unknown men offered to sell the book to him, along with a few other items. He said the men told him never to make the book public, which he agreed. Sáenz reportedly allowed two experts to assess the Codex. The experts declared the Codex fake. However, Sáenz went ahead and purchased the book. In 1971, Sáenz allowed American archaeologist Michael Coe to exhibit the Codex at the Grolier Club, New York. After allowing Coe to display it, Sáenz gave it to the Mexican government.

Due to the circumstances leading to the discovery of the Codex, many people have disputed its authenticity, including Coe himself, who displayed it.

Skeptics said there were a number of good reasons to believe the Codex was fake, apart from the sketchy way Sáenz procured it. Unlike three other Maya Codex finds, it is said this particular one contained writing on only one side of each of its 10 pages. Again, some of the pages appear to have been cut relatively recently.  Furthermore, there are odd discrepancies in the book’s calendar system, hinting that a forger might have been trying to imitate a calendar he saw in another Maya artifact. The drawings are also unusual for a Maya document, combining styles of the Mesoamerican Mixtec people with Toltec attire. The Toltec were often hailed by the Aztecs as ancestors, and their art shares many similarities with late Maya art. With these reasons, the authenticity of the Codex has been subjected to debate in the past.

But the latest on the Codex is that researchers who in the past disputed the Codex, are now making a U-turn. Coe and a team of other researchers, including Brown University social scientist, Stephen Houston, have done an intensive reevaluation of the Grolier Codex and declared it genuine.

The researchers published their analysis in the latest issue of Maya Archaeology, along with a complete facsimile of the Codex itself. Arts Technica reports the Codex turns out to be a 104-year-long calendar predicting the movements of Venus. The book’s Toltec-influenced style wouldn’t have been that unusual at the time it was created during the late Maya period, when the Maya city of Chichen Itza was built in Yucatán; its architecture also combines influences of the Toltec with more classical Maya symbolism.

Donna Yates, a University of Glasgow professor and expert in antiquarian art crime, sums up the researchers’ new findings in a case study on the Codex: “Objections about the calendrics in the Codex can be explained by an accepted alternative function of Maya codices and regional or temporal variations in the mythology of Venus.

“Sharp cuts on the Codex do not indicate modern tools, but rather breaks in the gypsum plaster that was used to prepare the surface of the document.

“The process through which the figures on the Codex were placed conforms to the use of sketch and grid lines seen in Maya murals.

“No modern pigments were found on the Codex, including in the portions rendered in the difficult-to-reproduce “Maya blue.” The other items said to have been found with the Codex also have been shown to be authentic.”

Professor Houston said the book contains images of “workaday gods, deities who must be invoked for the simplest of life’s needs: sun, death, K’awiil—a lordly patron and personified lightning—even as they carry out the demands of the ‘star’ we call Venus. [The Dresden and Madrid Codices] both elucidate a wide range of Maya gods, but in Grolier, all is stripped down to fundamentals.” He added that the book’s scribe was working in “difficult times,” as the Maya civilization was on the wane, revealing the scribe expressed aspects of weaponry with roots in the pre-classic era, simplified and captured Toltec elements that would be deployed by later artists of Oaxaca and Central Mexico.

This article (New Research Confirms Mysterious Ancient Maya Book, Grolier Codex is Genuine) is a free and open source. You have permission to republish this article under a Creative Commons license with attribution to the author and AnonHQ.com.