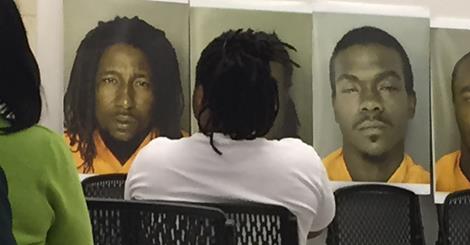 Seven men caught on camera selling drugs in the US State of South Carolina (SC) have gotten away with their crime….. Sort of.

The men from the town of Conway were lured to a recreation center near Myrtle Beach, and there they found blue folders awaiting them. Inside were photos taken with hidden cameras during undercover drug investigations spanning several months. They had been caught selling drugs red-handed.

When they found the folder, they thought their end had come, and that they are going to prison, but they had the shock of their lives when the police officers and prosecutors said that they were going to be giving a second chance.

Residents in Conway had complained that the open drug trade make them feel unsafe, and the top federal prosecutor in the state, Bill Nettles,  had teamed up with local officials to look for a solution beyond incarceration. With an innovative solution to clean up neighborhoods, in respond to the residents’ concerns, he has showed that he is a leader with innovation and he is competent to occupy his office.

Attorney Nettles said the seven men will be drafted into the Drug Market Intervention Initiative (DMII) which is a comprehensive program aimed at providing education and job-training to drug dealers, instead of sending them to prison to waste state resources. It is said that DMII has been very successful in North Charleston.

In an official meeting with the dealers,  the law enforcement authorities explained to the men the full detail of the DMII program. They were warned of the consequences if they failed to cooperate with authorities in the program.

“You ever heard like, ‘Let’s not make this a federal case?’ People doing federal time? I’m the guy that gives them federal time. That’s what I do. I give people federal time. Here’s the problem: The man that the president of the United States of America has asked to keep South Carolina straight — I know who each one of you are. And what you are holding in that blue [folder] right there is but a sliver of the evidence that we have that you have been engaged in selling drugs. So let that sink in for a second”, Nettles told the seven. “This is not going to be easy for these people sitting up here. Understand that they’ve made mistakes, but we’re going to have to support them and not just condemn them for what they’ve done. I think with the current climate between law enforcement and the communities that we’re having throughout this country, it is exceptional to me that everyone is sitting in here tonight supporting law enforcement and supporting these men and women here tonight,” County Police Chief-Saundra Rhodes told the community.

The men said that they appreciate the program, and will take advantage of it, adding that they had never imagined that the community cared about them.

This is a sound plan to deal with the drug problem. We urge other states to adopt such strategies to reform drug dealers, instead of sending them to prison to come out even more hardened than before they had been sent.