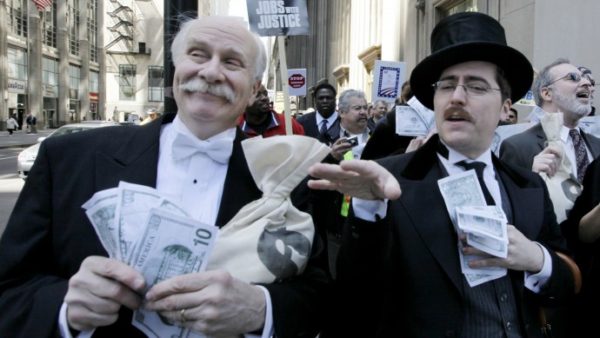 The picture is now clear. Many people have woken to the realities of politics in the United States. At first, some thought it was a mere rumor spread by concerned observers. Now, there is empirical evidence to support the claim that citizens really believe their political and economic systems are broken beyond redemption.

In the past, some observers have bemoaned the rate at which income inequality is rising in the United States, warning us that it is a recipe for disaster, if nothing is done to bridge the wide gap. A new national study, conducted by Marketplace and Edison, has revealed that almost three-quarters of the population of the United States (71%) believe that their country’s economy is rigged to favor the few super-rich in the country.

According to the study, 1,022 respondents were asked about numerous aspects of their financial lives, ranging from job hunts and medical bills, to the date of their most recent family vacation.

And this is how participants of the study responded to the questions asked: 32% said they have lost sleep over their financial situation.  48% said the economy for the next generation of Americans will be worse than that of the present. Also, on the political system of the country, respondents revealed that the current political climate is nothing to write home about. 75% said they are “dissatisfied” or “angry” with elected political officials in Washington, from the president to those in the two law making houses of the country. 47% answered that they are “not satisfied at all” with this year’s selection of candidates for presidential seat of the country. 50% believed that the candidate for the Republican Party [Donald Trump] or the Democratic Party [Hillary Clinton] for the White House would make no difference to their personal financial situation.

Observers say despite the claim that the economy of the United States is booming, it is worrying that many people in the country have lost confidence in both the economic and political systems, including even some politicians.

In November 2015, the Democratic Party’s nominee hopeful, Bernie Sanders used the term “Rigged Economy” in an advert of his campaign to blame the government and Wall Street for eradicating the middle class in the country. At a campaign rally in the city of Los Angeles, Mr Sanders said “This is an economy that is rigged and meant to benefit those on top. We need an economy that works for all people.”

Donald Trump has also made same comments about the economy of the United States being rigged. Trump recently has been criticizing his opponent, Hillary Clinton of representing the interest of the business class in the country, urging voters never to make a mistake to vote for such a candidate who will not represent their interest.

At a rally in New York in April 2016, Mr Trump said: “If you think about it, the economy is rigged. The banking system is rigged. There is a lot of things that are rigged in this world of ours, and that’s why a lot of you haven’t had an effective wage increase in 20 years, folks.”

This article (New Study Reveals 71% of Americans Think Country’s Economy is Rigged, Political System Broken) is a free and open source. You have permission to republish this article under a Creative Commons license with attribution to the author and AnonHQ.com.