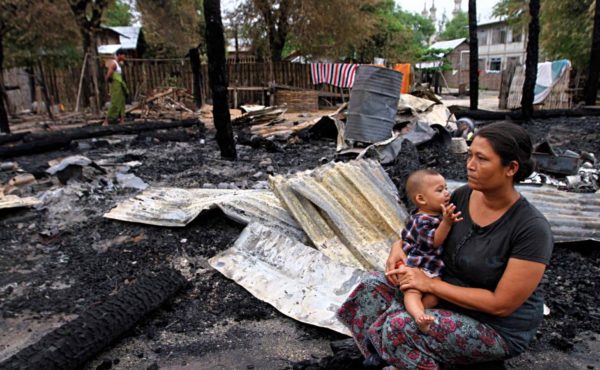 There have been reports of renewed violence against the minority Muslim population of the former restive country in south-east Asia, Myanmar.

Myanmar has been involved in one of the world’s longest-running civil wars. During the period, the United Nations and several other human rights organizations reported consistent and systematic human rights violations in the country.

In the country’s state of Rakhine, observers say the minority Rohingya Muslims have been under subjugation for years now.  Myanmar is a Buddhist-dominated country.  The Rohingyas are considered stateless by Buddhist hardliners in the country. Many people consider them as illegal immigrants from neighboring Bangladesh. The Rohingyas have therefore been largely relegated to destitute displacement camps and subject to a host of restrictions on their movements and access to basic services.

In 2012, religious violence erupted in Rakhine. The Rohingyas were hit hard. Many had to flee for their lives. It is estimated that the violence forced more than 100,000 of the Muslim Rohingya to flee their homes. In September 2014, al-Qaeda issued a statement that it will intervene in Myanmar, to save the situation for the Muslims. In a video posted online, al-Qaeda’s leader Ayman al-Zawahiri said al-Qaeda had not forgotten the Muslims of Myanmar, and that the group was doing what they can to rescue the Rohingya Muslims. Al-Qaeda is yet to carry out the threat of entering Myanmar.

The military took control of Myanmar in 1962. The junta government remained in charge of the country until 2011, when democratic reforms were allowed. In November 2015, the country held its general elections. The National League for Democracy, founded by the Nobel Peace Prize winner Aung San Suu Kyi, won absolute majority in the two chambers of parliament of the country. With a democratic elected government, observers thought the repression of the Rohingya Muslims would come to an end.

However, in the latest news, Muslims have come under fresh attacks in the country. The state-owned newspaper, Global New Light of Myanmar reports that in the northern state of Kachin, a group of people believed to be Buddhist adherents have attacked and burned down a mosque in the town of Hpakant. The attack reportedly took place on Friday July 1, when the Muslims were preparing to go for their Friday prayers.

Local reporters said the Hpakant attack is the second to have happened in the country within a week, against the Muslim population.  On June 23, it is said an irate Buddhist mob demolished a mosque in a village in an area known as Bago, about 60km northeast of the commercial capital, Yangon.  Local media reported that about 200 Buddhists stormed the Muslim settlement, demolishing the Mosque and beating people around. A building was also set ablaze in addition to the mosque. Police officers were later deployed to the village to protect the Muslim community. So far, no arrests have been made from that attack. According to the account of what happened in the town of Hpakant, it is said the town officials, who are predominantly Buddhist, gave the Muslims a deadline of June 30 to demolish their mosque, because it was built close to a Buddhist temple. When the Muslim failed to carry out the orders, the mob, armed with knives and other dangerous weapons attacked the mosque, setting it ablaze. Local police officers were said to be guarding the mosque when the attack happened. They failed to stop the attack.

A local police officer named Moe Lwin told the AFP news agency in an interview: “The problem started because the mosque was built near a (Buddhist) pagoda. The Muslim people refused to destroy the building when the Buddhists discovered it.” BBC reports that the United Nation has issued a strong warning to the country’s new government, telling them to take all necessary measures to end the religious tensions in the country, especially the attacks against the Muslim minority.

The United Nations’ Special representative on Human Rights in Myanmar, Yanghee Lee said she was concerned by reports that the government is yet to investigate the two mosque attacks in the country. She was quoted as saying: “This is precisely the wrong signal to send. The government must demonstrate that instigating and committing violence against ethnic or religious minorities has no place in Myanmar.”

This article (Muslim Minority in Myanmar Suffer Violence, Two Mosques Burnt Down Within One Week [Video]) is a free and open source. You have permission to republish this article under a Creative Commons license with attribution to the author and AnonHQ.com