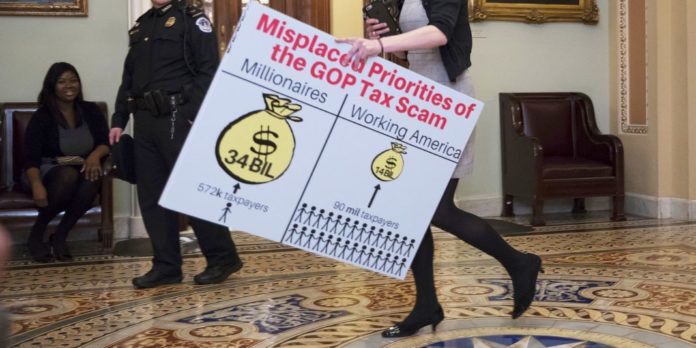 Trump’s tax bill has been described as a shot in the arm for the American economy by its supporters and a crushing blow to the impoverished by its detractors. The truth is that it is both of these things, to some extent, and the question that needs to be asked is whether the sacrifice is something middle America can stomach.

Before we can debate the consequences of the tax bill, we need to understand what has changed as a result of it. The table below by TheBalance.com gives an appropriate run-down of the income tax side of the equation.

Taxes remain the same for the lowest income bracket and the 200k-500k bracket but has fallen by 1-4% for the others, including those whose income exceeds 500k.

The real winner of this giveaway, though, is the corporation, and the very wealthy who own shares in them, with corporate taxes falling from 35% to 21% – or a whopping decrease of two fifths. It seems there has been a surge in stock buybacks, which benefits the 10% of Americans who own 80% of the shares.

Now there is an argument regarding competitiveness, and the US does have the third highest corporate tax rate in the world. At 21% it now appears to be at the average rate worldwide.

The claim is that corporations based in the US are more “competitive” as a result of tax cuts, disincentivizing them from seeking out tax havens and the hope is that they will overall bring in more taxable income. However, with rates as low as 1% in certain tax havens, just how competitive is a rate 10-20 times that number is going to be anyway?

According to a Pew Research Center analysis, corporate income taxes funded about 32% of the federal government in 1952, a portion which has whittled away to 10.6% by 2015. The proportion of corporate profits stashed in tax havens has increased tenfold since the 1980s.

The chart below shows just how drastic this fall has been, and payroll and individual income taxes have risen to account for the shortfall. Lowering corporate taxes is not going to encourage the big corporations to bring those profits back as long as there is a cheaper alternative, and competing for a 1% tax makes taxation as a concept pointless. It’s like telling an assassin because he’s so great at skirting the law that we’ll just go ahead and make murder legal. Let’s make his life easier, why not.

And by the way, the government needs the money; we are talking about the country with the largest defense budget in the world, three times as high as the next nation, and the greatest overall expenditures of any nation.

Trump also plans on balancing the budget – a task made far more difficult because taxes are decreasing in nearly every segment. Hence Trump’s budget for 2018 includes across-the-board cuts in welfare, education, healthcare and safety-net programs that help the impoverished and a ramping up of the defense budget.

Unfortunately, it seems that regardless of the cuts in social spending, we are more than likely to get a record trillion dollar deficit anyway. Congress has decided to increase defense spending, even more than Trump wanted to, and is unlikely to approve many of the spending cuts proposed (most likely those that receive the most media coverage and those that benefit the wealthy few such as agricultural subsidies).

Again, the poorest are hit hardest, unless Congress comes to the likely much-publicized rescue and saves some programs, and we’re left with an even bigger deficit than we were complaining about under the Obama administration.

The middle class stands to benefit as well, but it seems more of a bribe so that we’d not notice the wealth transfer occurring. The question that needs to be asked is if this is a sacrifice Americans are willing to make; prosperity for the few and possibly a more efficient economy at the expense of the bottom rung of society.