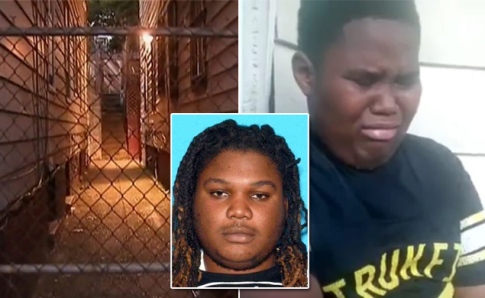 Newark New Jersey cops are in the news today after they held a ten year old boy at gun point, claiming that he “matched the description of” an armed robbery suspect. The boy, now identified as Legend Preston, was playing basketball, when his ball rolled into the alley behind his house. As he went after his ball, he was confronted by a slew of Newark cops who had their weapons drawn. The police were looking for a twenty year old male subject with long dread locks – a far cry from the 90 pound ten year old they confronted. Onlookers intervened, surrounding the boy, forming a wall between the cops and Legend. The Newark police deny that any weapons were pointed at any children, but this is disputed by several witnesses. A Newark tactical team was in pursuit of Casey Joseph Robinson for armed robbery when Legend crossed their path.

Neighbors confronted the officers yelling, “He’s only a child!” They responded by yelling “He matches the description,” one of the go to catch phrases police will use to detain just about anybody. A Facebook video has since gone viral, showing the aftermath of the cops’ actions. The video shows Legend sobbing as he is consoled by family. “I was scared for my life. I was thinking that they were going to shoot me,” Legend said as he wiped away the tears.

Patricia Solomon had a scathing review of the Newark Police officers’ behavior that day. “When I think about my child staring at the end of a gun…One wrong move, and my child wouldn’t be here right now. My son could have tripped. He could have reached for a toy. They could have done anything to my son and it could have been his fault.” Solomon knew she had to bring this to the public’s attention. “What option have they given me but to speak out. I didn’t ask for any of this. My prime concern is not an apology. My concern is reform of this system. I want to see accountability and responsibility.”

The case has since been referred to the Essex County Prosecutor’s Office for further investigation. None of the officers involved have been identified.

Sources: NY Daily News, Photography Is Not A Crime.

This article (Newark Cops Hold Ten Year Old at Gun Point Because He “Matched the Description”) is a free and open source. You have permission to republish this article under a Creative Commons license with attribution to the author and AnonHQ.com.