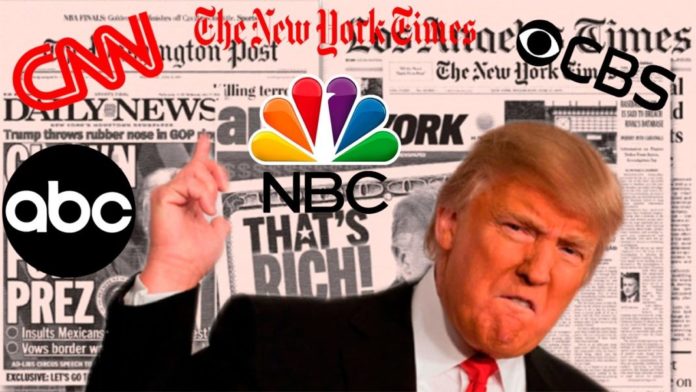 To explain the paradox, let’s first refresh your memory.

Let’s begin with The New York Times, which on Oct. 24, 2016, used two full pages of paper to print out every person and organization insulted by Donald Trump on Twitter since his presidential campaign launched more than a year ago.

Earlier, on Oct. 11 precisely, NYT published “newsworthy information about a subject of deep public concern.” Subsequently, the Republican presidential nominee threatened to sue the prestigious US newspaper for publishing an article that accused him of sexually assaulting two women years ago.

After he was elected the 45th President of the United States on Nov. 8, Trump told NYT publishers, editors and columnists: “I will say, The Times is, it’s a great, great American jewel. A world jewel. And I hope we can all get along well.”

However, The Times retorted, saying, “You are an aberration and abomination who is willing to do and say anything — no matter whom it aligns you with and whom it hurts — to satisfy your ambitions. Let me tell you here where I stand on your ‘I hope we can all get along’ plea: Never.” The Guardian, on its part, termed Donald Trump “shameless, impulsive, vain, threatening, slapdash, abusive – and much else” in an editorial published on Dec. 23, 2016.

“Never before has a candidate tried so hard to make America hate again. Never before has someone endorsed by the Ku Klux Klan prepared to enter the White House. Never before, if you believe the CIA, has a foreign power intervened so audaciously in a US election.

“Two things can nevertheless be said with some confidence. The first is that, even if they do not believe him, Americans have elected their most unpredictable and dangerous president of all time. The second is that Mr Trump will fail in the end…”

On Jan. 10, 2017, BuzzFeed published an explosive but unverified 35-page report claiming to prove the Russian government had been “cultivating, supporting and assisting” President-elect Donald Trump for at least five years. It used CNN’s Jan. 10 story — which claimed four of the senior-most US intelligence chiefs  presented Trump with evidence that Moscow intended to harm Clinton’s candidacy and help Trump’s — so that the “Americans can make up their own minds about Donald Trump.”

During his press conference at Trump Tower in New York on Jan. 11, Trump attacked CNN, calling the organization “fake news” as well as criticizing BuzzFeed, calling it a “leftwing blog” and a “failing pile of garbage” for publishing the unverified documents.

“BuzzFeed’s decision, besides its immediate political ramifications for a president-elect who is to be inaugurated in 10 days, was sure to accelerate a roiling debate about the role and credibility of the traditional media in today’s frenetic, polarized information age.

“Of particular interest was the use of unsubstantiated information from anonymous sources, a practice that fueled some of the so-called fake news — false rumors passed off as legitimate journalism — that proliferated during the presidential election.”

“BuzzFeed’s decision to publish an intelligence report filled with salacious and unsubstantiated claims about Donald Trump’s purported behaviour in Russia has triggered a political storm and debate over media ethics.”

Incidentally, both The New York Times and The Guardian forgot that they themselves scrambled over each other to cover the viral fake news within minutes of it going viral.

In an article titled “Trump Received Unsubstantiated Report That Russia Had Damaging Information About Him” published on Jan. 10, The New York Times stated:

“The chiefs of America’s intelligence agencies last week presented President Obama and President-elect Donald J. Trump with a summary of unsubstantiated reports that Russia had collected compromising and salacious personal information about Mr. Trump, two officials with knowledge of the briefing said.”

“The material, which has been seen by The Guardian, is a series of reports on Trump’s relationship with Moscow. They were drawn up by a former western counter-intelligence official, now working as a private consultant. BuzzFeed on Tuesday published the documents, which it said were ‘unverified and potentially unverifiable’.”

While both The New York Times and The Guardian reported on the exact information CNN and BuzzFeed did, the two seem to keep a distance from the controversy to either appease Donald Trump or avoid being called fake news themselves.

This article (NYT, Guardian Castigate Fake News Buddies CNN, BuzzFeed for Sabotaging Trump’s Image) is a free and open source. You have permission to republish this article under a Creative Commons license with attribution to the author and AnonHQ.com.