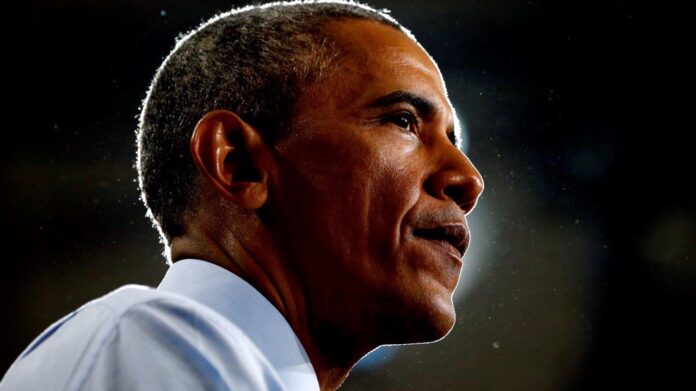 Obama’s vision of his “third term” has startled viewers in 2022 as it seems to describe the Biden administration in perfect detail, right down to the earpiece and piped lines.

After being asked by the interviewer if he ever thought about a “third term”, Obama replied:

“You know what, if I could make an arrangement where I had a stand-in, a front man or a front woman and they had an earpiece in and I was just in my basement with my sweats looking through the stuff, and I could sort of deliver the lines, but somebody else was doing all the talking and ceremony, I would be fine with that.”

It is becoming clear that Obama hand-picked Biden and his equally inept sidekick Kamala Harris (as “front man” and “front woman”) to carry out his third term — just the way he envisioned it.

Ol’ Joe even has his BFF’s “earpiece in“, where Obama can “sort of deliver the lines” and run the country from his palatial beachfront mansion.

It’s clear, Obama set everything up just the way he wanted it. He is the puppet master behind Joe and Kamala. This means Biden’s disasters are Obama’s disasters.

Proof of this arrangement was confirmed when Biden and Obama recently appeared together, side-by-side on stage.

The world witnessed how the Democrat Party overtly acknowledged Obama as their real POTUS, while Biden was ignored and left alone to wander the stage aimlessly, searching in vain for someone —anyone — to simply acknowledge his presence.