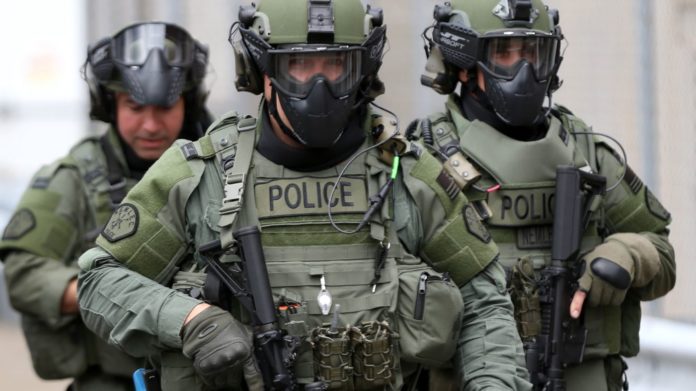 Last Monday, US President Barack Obama, journeyed to Camden, N.J. Police Department to shine some light on crime reduction as well as their new community policing tactics that the Obama administration hopes can become a standard around the country.  Due to the ridiculous number of recent police shootings aswell as the more clear coming increasing numbers of Immigrant deaths, the administration has finally decided to take action with the idea of a ban-list.

“We’ve seen how militarized gear can sometimes give people a feeling like there’s an occupying force as opposed to a force that’s part of the community that’s protecting them and serving them,” Obama said in Camden Monday. “It can alienate and intimidate local residents and send the wrong message.” the Administration stated. The idea is to limit what Agencies such as the Defence, Justice and Homeland Security departments can provide to local police stations, even in the event of a riot.

The order established a “controlled equipment” list, which puts control into government hands before federal agencies can transfer equipment to local police departments. The order also requires police departments to provide much more information on why they need the tactical equipment to better control the situation at hand. The government will also be keeping a more keen eye on the equipment to help track where it goes and what happens with it. The equipment in the list consists of things such as riot equipment, shields and drones.

This may sounds great to people, however, this could well be some sort of money saving scam for police departments to spend their own funds instead of government funds. Police departments can completely bypass the federal restrictions by purchasing the equipment from private sellers.

Officials from the White House stated that the President chose to visit Camden Police department to try and help repair the relationship between the police departments and the residing communities. Camden police officers are known to happily volunteer in schools and regularly patrol the streets. “This city is onto something,” – Barack Obama

In December last year, Obama signed new orders to help determine new ways of boosting public trust with the police forces. The final report came in last week. The report included better training for officers as well as new ways to help the public see officers as the Guardian, rather than the enemy.

Obama also announced last month that his already-existing “My Brother’s Keeper” initiative was getting a spin-off to help address the lack of opportunity that young minority boys face.

At the announcement of the spin-off initiative, Obama stated that a large number of blacks where being pulled over by police officers for “no reason”, which, without a suprise, has angered some of the law enforcement community.

Get Your Anonymous T-Shirt / Sweatshirt / Hoodie / Tanktop, Smartphone or Tablet Cover or Mug In Our Spreadshirt Shop – We have more than 30 designs to chose from! This article (Research Suggests That Shutting Down Pirate Sites May Be Counterproductive) is free and open source. You have permission to republish this article under a Creative Commons licence with attribution to the author and Anonhq.com