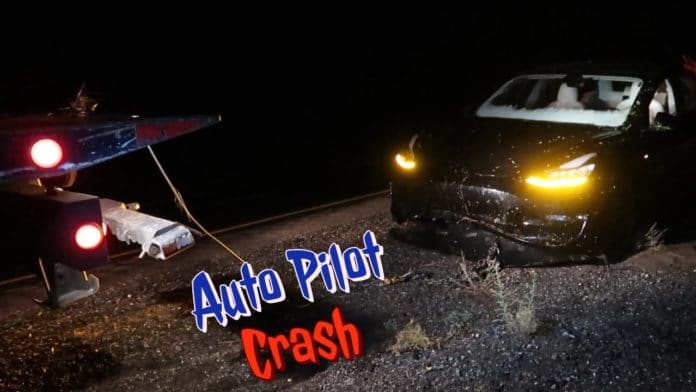 Tesla Autopilot seems to give some drivers a sense of invincibility while traveling the roads as they place their lives in the hands of artificial intelligence.

This was the case with YouTuber Dougal Vlogs, who uploaded a video on Dec. 30, showing a Model 3 presumably engaged in “Autopilot” (as per the video’s headline) traveling at a high rate of speed (over 70 mph) during a rainstorm.

The video is short, about 15 seconds, the vlogger is seen speeding down a two-lane highway traveling at 70-75mph while using Autopilot.

The vlogger is holding a camera about to talk about the Model 3, and an alarm sound starts blaring. Next thing you know, the Model 3 hydroplanes and crashes into the shoulder of the road, all caught on camera!

The vlogger was heard several times during the incident yelling “OH MOY GOD” — and at the end of the video tells his audience he just crashed.

With-in 24 hours, the video has been viewed 70k times and with over 250 comments. The vlogger was mostly ridiculed in the comment section of the video.

One YouTube said, “Let’s try out AutoPilot. Oh, yeah did I mention during a typhoon?”

Another said, “You should be cited for driving too fast for the weather conditions, reckless driving for not having your hands on the wheel, and distracted driving for being stupid enough to film in a rainstorm. Sadly you’re going to get a bunch of clicks and lots of attention for this piece of amazing stupidity. I am glad you are OK, but I am more glad that you didn’t kill some innocent person who might’ve been stuck on the side of the road or unfortunate enough to be driving next to you while you were pulling this kind of stupid nonsense.”

Someone said, “His license should be taken away. He’s a danger to all drivers and pedestrians on the road.”

Another said, “Elon Musk: “Mate! We can fix this with a firmware update.” LOL”

It remains to be seen if it was the driver’s fault or if Autopilot malfunctioned.