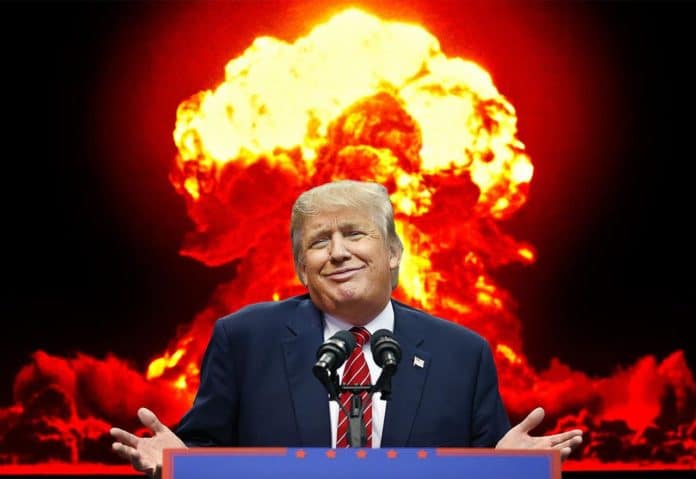 War hawks who have had their crosshairs trained on Iran for years enthusiastically celebrated Trump’s decision.

As peace advocates voiced alarm at the very real prospect of all-out conflict with Iran following the assassination Thursday night of that country’s top military leader on orders from U.S. President Donald Trump, war hawks who have had their crosshairs trained on Iran for years enthusiastically celebrated Trump’s decision—and even suggested the president should go further by targeting the nation’s oil refineries.

“To the Iranian government:  If you want to stay in the oil business leave America and our allies alone and stop being the largest state sponsor of terrorism in the world,” tweeted Sen. Lindsey Graham (R-S.C.), a longtime supporter of regime change in Iran.

Trita Parsi, executive vice president at the Quincy Institute for Responsible Statecraft, tweeted in response to the torrent of praise that “hawks are celebrating [Qassem] Soleimani’s assassination not because they believe it weakened Iran. Or the IRGC. Or that Iran will lose in Iraq. But because they believe we have passed an irreversible point of escalation.”

“From here, war is unavoidable, they believe,” Parsi added. “And celebrate.”

The likely unlawful U.S. assassination of Soleimani—and the jingoistic applause it provoked—led many to express fears of a global conflict, catapulting “World War III” to the top of Twitter’s trending list. Trump, for his part, simply tweeted an image of an American flag following the strike:

Trump’s decision to kill Soleimani, as well as at least six others, with a drone strike in Baghdad came after the Pentagon threatened Iran with preemptive action in response to supposed indications it was planning attacks on U.S. forces in the region.

Though the Pentagon did not offer a shred of evidence that Soleimani or militia groups were planning attacks, corporate media outlets dutifully echoed the Trump administration’s line, leading some commentators to see parallels with the buildup to the Bush administration’s 2003 invasion of Iraq.

“I don’t see any way to stop what is coming, war from the Mediterranean to the Indus and harsh repression in the U.S. that may vitiate the 2020 election,” said Barnett Rubin of the Center on International Cooperation. “This is the test for the Democrats: have our leaders learned anything since 2003? I fear the answer.”

“No. 1 bad guy” according to America. There are millions of people in Iraq, Iran, Lebanon, Syria who see him as a hero. He was crucial to preventing ISIS and Al Qaeda from taking over the region, while US policy helped those groups. This black/white narrative is propagandistic https://t.co/tlDlPsiHr1

Observers warned the U.S. assassination of Soleimani, on top of the Trump administration’s violation of the nuclear accord last year and other aggressive actions, effectively foreclosed the possibility of peaceful negotiations with Iran.

“Whatever happens next, understand and never stop pointing out that Donald Trump walked into office with no crisis with Iran,” said Stephen Miles, executive director of Win Without War. “He then filled his cabinet with warmongers, walked away from a multilateral diplomatic accord, and purposefully engaged in ‘maximum pressure.’ He owns this.”

Spoke to a very knowledgeable person about what Iran's response to Soleimani's assassination might be. This would be the equivalent of Iran assassinating Petreus or Mattis, I argued.

No, he responded, this is much bigger than that…

“Trump’s Iran policy has been seeking to incite war with Iran since he reneged on the nuclear deal in May 2018,” said Sina Toossi, senior research analyst with the National Iranian American Council. “If a war breaks out, the blame lies squarely with this disastrous policy and its proponents.”

"He was a killer, and a rabid one"

This isn't Fox, this is CNN and MSNBC.

They're already all in on war. Not even the pretense of debate.

“Trump thinks he got his Bin Laden moment in an election year,” Toossi added. “In reality, he’s made the worst strategic mistake by an American leader since the Iraq invasion. The consequences will be felt for years to come.”

The only reason World War 3 has not started is because Iran and its allies are sane, rational actors who understand the human cost of war, unlike the US, which is happy to send soldiers to kill and be killed in countries most of its citizens can’t find on a map.