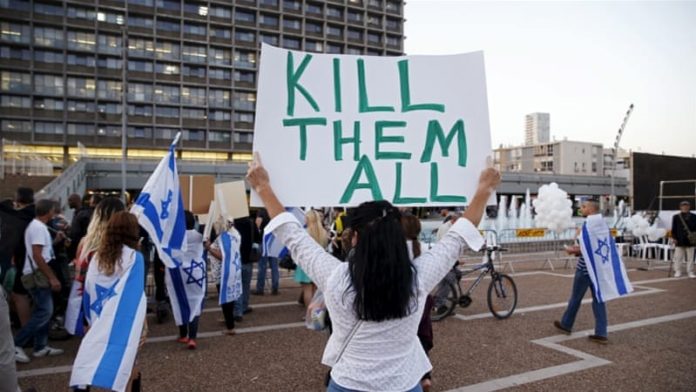 An activist from Israel, named Sahar Vardi (27), spoke with Al Jazeera a few months back to explain how the Israeli government keeps its citizens complacent to its activities. Vardi explains that through a mixture of oppression and fear, Israeli Jews are lead to view other races as a threat. Racism has become commonplace in the Jewish-majority state.

In Israel, it’s mandatory for Israeli citizens to serve in the military, but some citizens refuse. Included among the reasons, is opposition to the army’s policies, and its occupation of Palestinian territories.

Sahar Vardi is an Israeli who refused to join due to her views of the Palestinian occupation. Although she had different, easier options available when it came to opting out of the military, she chose to remain honest and state her political opposition.

A military committee assesses cases where citizens refuse to join. Using the word “occupation” when pleading your case is an automatic fail. If you don’t report to duty at this time, you are convicted in a military court and sent to prison.

You are to report to duty again upon release. If you do not, the process will start over, and you’ll return to prison. This continues for an undetermined length of time.

“I did go to the conscientious objectors’ committee, but decided in advance that I will say the real reason why I did not want to be in the military and use the word ‘occupation’ in my explanation. And I failed the committee’s test.

“For me, it was kind of an opportunity to make a political stand. I knew I could get out in whatever way – I could have said the right things to the conscientious objector’s committee. I know the answers they wanted to hear. But the idea is that it’s an opportunity to talk about the occupation.”

Despite most citizens having served in the military, most are still unaware of the reasons for occupying Palestinian lands. Some refuse to call it an occupation “because they like to hide behind the legal discourse of it being disputed territory.”

The military teaches citizens to dehumanize Palestinians. This ability to dehumanize other humans contributes to the acceptance of racism in society. Vardi states:

It’s relevant to mention the “Right of Return,” an article that was written into The Universal Declaration of Human Rights. In 1948, the United Nations proclaimed the Right of Return a “universal right that is binding under international law, enjoyed by every people regardless of where they come from,” (source). Under the Right of Return, “everyone has the right to leave any country, including his own, and to return to his country.”

Israeli citizens broadly ignore this law, and the government ignores it completely. To accept it is to accept the Palestinian’s right to their territory. The Zionist mindset enables citizens to ignore this international law. Many are born with the concept that a strictly Jewish state is needed to protect themselves.

Zionism his highly controversial, and has been equated with racism for years. In fact, the United Nations passed a resolution in 1975 concluding “Zionism is a form of racism and racial discrimination”. Based on the International Convention on the Elimination of All Forms of Racial Discrimination’s definition of racism, it states discrimination is:

“Any distinction, exclusion, restriction or preference based on race, colour, descent, or national or ethnic origin which has the purpose or effect of nullifying or impairing the recognition, enjoyment or exercise, on an equal footing, of human rights and fundamental freedoms in the political, economic, social, cultural or any other field of public life,” (source).

The UN’s resolution was repealed in 1991 after George H.W. Bush condemned it, but many still consider the Zionist ideology to be racist. Israelis in the military are told their society’s population must be strictly controlled to protect the state at all costs. This means treating other races as enemies, which can only be accomplished through racism, according to Vardi.

Oppression plays its role as well. Like the United States, Israel has one of the biggest gaps between the rich and poor. Those who are struggling to survive don’t have time to worry about the plights of others. Vardi states:

“I think one of the things that Israel has done very well is to maintain a level of oppression, which means you will always have to deal with certain issues, but you also still have something to lose because, when people don’t have anything to lose, they revolt.”