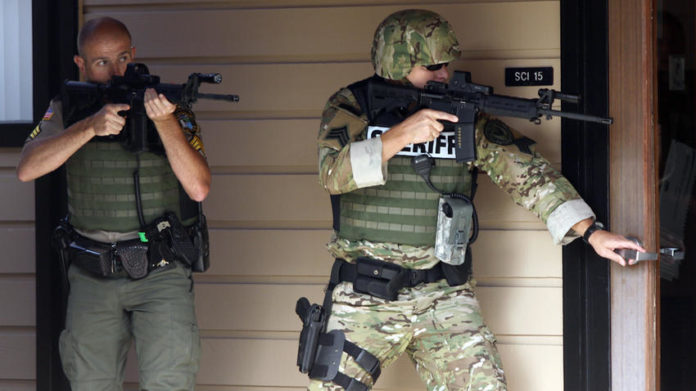 Another terrorist (yes, we call him terrorist, while the media probably will call him soon ‘mentally retarded’ as he is neither black or muslim) shook our nation once again today as he took the lives of 10 college students and injured another twenty plus in the process of his cruel actions. What started off as another Thursday in Oregon, soon came to a terrifying halt and the Umpqua Community College. Our nation is unfortunately facing another school shooting making this an upwards of 94 school shootings in the last 2 years. One of the woman, who also claimed to have had a grandmother inside the college, was “Tweeting” a portion of this massacre as it unfolded. She went on to Tweeting,
“The shooter was lining people up and asking if they where Christian,” she also went onto writing “If they said yes, then they where shot in the head. If they said no, or didn’t answer, they were shot in the legs. My grandma just got to my house, and she was in the room. She wasn’t shot but she is very upset.
The student had attempted to save a life of one of here close classmates, however the CPR she attempted on her friend was not enough. The shooting of Christians is also backed by another student by the name of Kortney Moore.

As the young man ordered people to the ground, Moore laid patiently with her classmates and waited. As the horrible incident continued to grow, students all over the college where running around like ants. A teacher who was giving a lesson in the next room over also heard the shots and went to investigate. As the teacher left the class waited in horror, followed by hearing shots being rang out at a rapid pace. The students then fled and forgot about all of their belongings.

A young student at the local Roseburg campus, had been in class when the shooting started. She stated to CNN’s Wolf Blitzer,
“I heard a popping noise, almost like a balloon popping. I knew something wasn’t right and so I get down. All of the students just dropped to the ground and huddled together behind backpacks and chairs under the tables. We locked the doors and turned off the lights, and we were all pretty much in panic mode.”
The shooting appeared to have started in one of the schools buildings before ending in the science building. The Douglas County Fire Marshal, Ray Shoufler, informed the public “We arrived to find multiple patients in multiple classrooms. Law enforcement was on scene and had the shooter neutralized.” He also reported that two of the patients had passed away during the transport to the local hospital.

The Mercy Medical Center had posted to social media site Facebook, they had received 10 patients and the extent of their injuries was not known at that time. However, 3 female victims was treated at Peace Health Sacred Heart Medical Center.
Chris Harper was equipped with body armor and heavily armed, reported a law enforcement officer. He was also equipped with an unusual large supply of ammunition which is reported to be enough for a long gun fight. A total of 4 guns had been reported at the scene of the crime.
As the officials looked into Chris’s social media and other media outlets, they found what they believed to have been Chris discussing the shooting the night before on a famous image-based bulletin known as 4chan. The writer (supposedly Chris) started talking about his future actions.

Other members of 4chan had actually encouraged his actions and even provided some useful information for Chris to do while committing his crime. The messages came out to be a mixture of supporters and offenders. The supporters characterized him as a “Twisted Hero”, while the defenders characterized him as a “Pathetic Loser”. Chris goes onto stating in 4chan “This is the only time I’ll ever be in the news. I’m so insignificant,”

Speaking from the White House, Obama stated that the gunman had clearly been a troubled and stated “It cannot be this easy for somebody who wants to inflict harm on other people to get his or her hands on a gun.” President Obama the vowed to continue to push for new weapon and gun policies that should help to prevent further mass school shootings.
The students cell phones had been confiscated as they were escorted out of their buildings and were even patted down, the students were escorted to a safe location using only buses the authorities set into place for their safety.

Sometime after the police showed up, the gunman and the police exchanged fire. The officers were not injured, but the gunman was killed.